The MSM: Such a Little Phrase, So Much Left Unsaid

As Saddam's trial gets underway again, I recollect that back in October, Kathleen Parker wound up the satire machine:

Here are the headlines you may have missed: "Iraqi democracy takes bow to standing ovation, global applause" Or "Iraqi voter turnout another blow to al-Qaida." Or perhaps: "Joyful Americans dance in streets as Iraqi voters approve new constitution."


Fat chance. In some towns and cities, Americans who rely on the local paper for news might not have known there was a constitutional referendum in Iraq on Saturday. Or that there was almost no violence. Or that more than 10 million Iraqis voted, including many Sunnis.

Meanwhile, Michelle Malkin points out that

The victims of Saddam are being overshadowed by media reports about terror-apologizing "human rights" activists decrying the "show trial." Meanwhile, journalists are complaining about courtroom security procedures.

Several months back, Sabrina Tavernise in the New York Times: 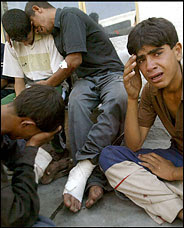 It is to be the largest military action led by Iraqis since the American-led invasion two years ago and an important step by the government to convince Iraqis, who have been killed by the hundreds in the past month, that it is serious about taking on the insurgency.

The IHT version of the article was slightly different:

…the first attempt by the government to convince Iraqis, whose deaths have jumped five-fold since it took power, that…

Notice the passive tense in both versions:

Iraqis, who have been killed by the hundreds in the past month…


Iraqis, whose deaths have jumped five-fold since [the government] took power…


Again, the use of the passive, as if Iraq's chaos were something the Americans had brought with them (willingly or not) to an innocent, unsuspecting, more or less normal country, and as if the chaos were not the result of deliberate decisions planned, discussed, and carried out by amoral thugs; and, while we're on the subject, the continued use of the word "insurgents", as if the deliberate targeting of healers were an act of justified rebellion. (Almost as courageous as using dogs — merci à Hervé). A much better expression would be "paramilitary death squads" (see below).


As if that were not enough, we get this immortal sentence, in which Tavernise lends credence to the 12 years of propaganda from the state-owned press of a one-party dictatorship.

Under Saddam Hussein, the health care system in Iraq was a showcase, with many Iraqis receiving excellent, inexpensive care, though portions of the population — poor Shiites in Baghdad slums and Kurds in Iraq's north — were skipped. Later, under the economic sanctions of the 1990's, Saddam used the increasingly worn system to persuade the world to ease economic pressure.

(On the web version, this was rendered: "In the early years of Saddam Hussein, the health care system in Iraq was a showcase, with most Iraqis receiving excellent, inexpensive care. But Saddam let the economic penalties of the 1990s bite deeply into medical care and used the damage to the increasingly worn system to try to persuade the world to ease economic pressure on Iraq.")


Can you imagine the outrage — domestic and international — if Washington were to say something along the lines of "the health care system in America is a showcase, with many Americans receiving excellent, inexpensive care, though portions of the population — poor blacks in L.A. slums, rednecks in America's south, and the inhabitants of New Orleans — were skipped."


But when foreign countries make that kind of claim, or even loftier ones of 100% protection (such as the case of the Soviet Union), the MSM takes those claims at face value.

The victims of Saddam are being overshadowed by media reports about terror-apologizing "human rights" activists decrying the "show trial." Meanwhile, journalists are complaining about courtroom security procedures.

Under Saddam Hussein, the health care system in Iraq was a showcase

Is it truly any wonder why we blog?


Let the last word go to the late Steven Vincent:

Once, in a Baghdad restaurant, I overheard some Westerners and Iraqis discussing the conflict — when the Westerners asked what they thought of the "occupation", one Iraqi retorted, "What 'occupation'? This is a liberation."


…How, then, should we describe this war? What words and concepts define the situation more accurately? Since Iraq is now liberated, we might replace "occupation" with a word taken from the post-Civil War era: "Reconstruction," as in, "the Coalition is reconstructing Iraq." We might then exchange the term "guerilla fighters" for the more precise term "paramilitaries." Rather than noble warriors fighting to liberate their people, "paramilitaries" evoke images of anonymous right-wing killers terrorizing a populace in the name of a repressive regime — which is exactly what the fedayeen and jihadists are doing. Or we could simple dust off the venerable term "fascists."