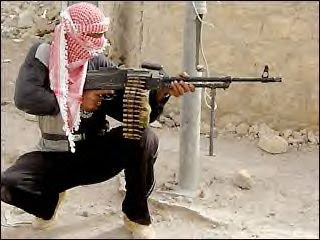 From the Captain’s Quarters blog:

«What caught my eyes were the fact that the "insurgent" had his finger off the trigger and along the frame (excellent safety practice, but something not expected of an untrained insurgent, especially in a firefight). The second thing was that fact that he had his hand wrapped around the barrel, which would be very hot is he were actually firing it (especially during the summer in Iraq). The Machine gun in the picture is a Russian PK, which fires the powerful, long rimmed 7.62 cartridge, not the lighter intermediate round of the AK-47. Speaking as a "gun nut, firing such a machine gun in automatic while in that crouched position would put you on your rear end, with the barrel pointing towards the sky.

In short, this smells of a "staged" picture.»

When does the documentary glorifying their "bravery" come out?