But Don't Forget How Skeptical Europe's Public Opinion Was, and Is, of Bush!

Can't the only explanation for that be that the Europeans, those wise and objective citizens of Europe's, really are honest in their distrust for Uncle Sam? Bill Sammon answers:

The prime minister of Slovakia … blamed the media for unfairly turning the European public against President Bush by negatively slanting coverage on Iraq. 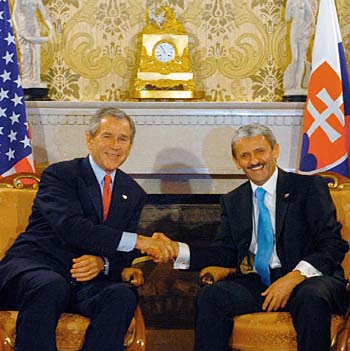 After meeting with Mr. Bush twice in less than a week, Prime Minister Mikulas Dzurinda told reporters that the president also blamed the press for portraying him as eager to invade Iran to eradicate its nuclear program.


"President Bush told me in Brussels: 'I am so unhappy that media creates the picture that Bush wants war in Iran. This is crazy,' " Mr. Dzurinda told a small group of reporters over lunch.


The prime minister was reminded that while the governments of Central and Eastern Europe supported Operation Iraqi Freedom, the populace was much more skeptical, according to polls.


Mr. Dzurinda responded by telling the journalists, including one from CNN, that he was "shocked" to see media outlets like CNN and the British Broadcasting Corp. (BBC) showing "only American soldiers killing people. But nobody was able to show Saddam Hussein, who killed many, many thousands of Iraqi people."


"It was impossible to see a real picture of this regime," he lamented. "And the result is the public is one day strongly against Bush. 'Bush loves war,' he's 'new terrorist,' and so on and so on."


The prime minister predicted that it is "only a question of time when people in Slovakia, in Germany, in European countries, will understand more that this activity were necessary. And the world, without Saddam Hussein, is much more democratic than before."

Still, plenty of Slovaks braved nasty weather to give an enthusiastic reception to Mr. Bush's speech yesterday at a Bratislava square where the protests that brought down communism 15 years ago began.


When he told the crowd of thousands that "the American people are proud to call you allies and friends and brothers in the cause of freedom," his audience exploded with applause.


["In recent times we have witnessed landmark events in the history of liberty — a Rose Revolution in Georgia, an Orange Revolution in Ukraine and now a Purple Revolution in Iraq," he said, in a reference to the Iraqis who dipped their index fingers into purple ink to show they had voted.]


After the speech was over, Mr. Bush went into the crowd and was swamped by enthusiastic Slovaks — the first time he pressed the flesh during his five-day trip to Europe.


Foreign Minister Eduard Kukan said after the speech that "the meeting in the square was fantastic."

Unless I am mistaken, this was entirely ignored by the press in both France and Germany. (Dare we generalize this to all of "Old Europe"? I think so…)

Mr. Dzurinda, who grew up under communist oppression in the Soviet bloc, said nations such as his were more supportive of Operation Iraqi Freedom because they remembered communism. Slovakia has sent troops to Afghanistan and Iraq.


"I spent many years under tyranny," he said. "So I completely understand what it means to fight for democracy — don't take this for granted.


"Maybe this is why I understand better than Chirac or Schröder," he added, referring to French President Jacques Chirac and German Chancellor Gerhard Schroeder, both of whom opposed the Iraq war.


"I understand, [with] the president of the United States, that this is impossible to wait forever," he said. "I hope that the German chancellor and French president understand more today than yesterday."


Mr. Dzurinda said he had been meeting with Russian President Vladimir Putin on April 9, 2003, when the statue of Saddam was pulled down in Baghdad, signaling the end of the dictator's regime.


Mr. Dzurinda said Mr. Putin, whose nation had been one of the prime suppliers of weapons and political support to the Saddam regime, launched into a 25-minute discussion that "was more lecture than dialogue."


"I was happy," the prime minister recalled. "President Putin was not so happy.


"He told me that the United States missed the chance to be a moral victor," he said. "He told me it would be better to withdraw forces."