As We Predicted in 2008, Accusations of American Racism Would, and Will, Never Cease 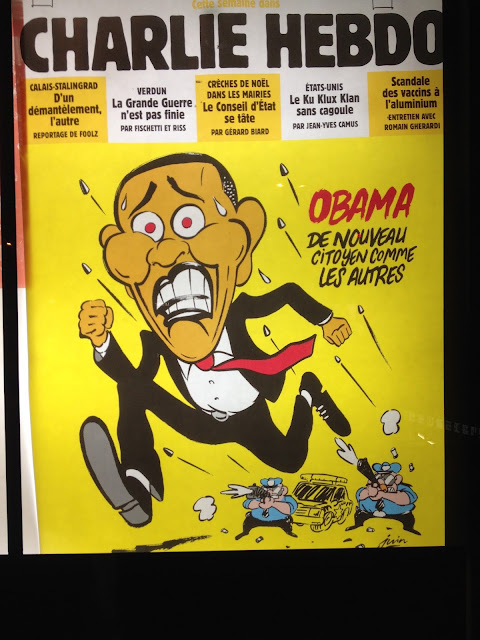 As we predicted weeks before the 2008 vote, the (then-hypothetical) election of Barack Obama would in no way bring an end, not to American racism, but to accusations of American racism.

In its issue immediately prior to the 2016 elections, Charlie Hebdo was back to its tired old prejudices and its tired old tricks, saying Obama [Would] Again Be a [U.S.] Citizen Like All the Others, while the poor black man (victim) is forced to flee under a hail of bullets fired by white police officers. In the meantime, Jean-Yves Camus reports on the alt-right (Ku Klux Klan Without the Hoods) while a "Jacob Hamburger" compares The Donald to (sigh) a cowboy and a gangster.

A couple of weeks prior to the 2008 election, I wrote a post asking a series of questions…

(By how many percentage points must Barack Obama win for "America" to "prove" (to itself as well as to others) that it is no longer racist? … What if the Illinois senator wins by, say, 60%? That's a pretty impressive victory by any standard. But does that mean that the other 40% must necessarily be racists? Must race be the only, or the main, reason for their voting against Obama? … And how about the future? Given that one in seven Americans is black (it's actually about 12.85% or closer to one in eight, but since we are talking about presidential terms, seven is an easier figure to handle), must Americans from now on elect an African-American every seven election cycles to prove they aren't racist? … Or must Americans make up for the 220 years without an African-American at the helm, meaning that the next six presidents (the total number of white males in the White House, 43, divided by 7) must be black.)

Here was/is the point of the questions


What is the point about these questions? The point is as follows: Make no mistake about it. Should Obama win the election, the hand-wringing and wild charges about American racism — both at home and abroad — will at best cease temporarily. Any opposition to President Obama's policies will be construed as racism "rearing its ugly head" again.

And at best (at best, according to the — non-thinking — bean-counters, that is), in the faraway future, we will be told by the snickerers and the snorters: "Well yeah, a black American was elected in 2008 (even reelected in 2012), but that was a one-time travesty!"

Or they will say that oh, sure there is an African-Americans (there are African-Americans) whom Americans have elected president, but… his (but their) skin color wasn't dark enough. "Would they ever" — insert knowing ironic smile here — "elect a really dark Negro?"

… the basic truth about racism is as follows: racism is far less an accurate description of an attitude prevalent in a given society, in a given individual, than it is a weapon that is wielded to demonize one's opponents while making oneself appear heroic by parroting (and by doing nothing else than parroting) politically correct platitudes. More often than not, in other words, the fight against alleged pockets of racism is nothing more noble than a self-serving act of self-praise.

Watch the video, Erik Explains Racism in the 2008 Election to His Cat

• Dennis Prager: Foreigners of every race know that
the U.S. is the least racist country in the world but most black
Americans and the entire left deny it (the entire left, foreign as
well as American)

• A week or two before the 2008 election, Michael
Ramirez drew a cartoon called Who Are We to Judge?