Foreigners of every race know that the U.S. is the least racist country in the world but most black Americans and the entire left deny it


The United States is the least racist and least xenophobic country in the world.
Foreigners of every race, ethnicity, and religion know this.

Most Americans suspect this.

Most black Americans and the entire left deny this.

And members of other races and nationalities know this. Even Muslim and Arab writers have noted that nowhere in the Arab or larger Muslim world does an Arab or any other Muslim have the individual rights, liberty, and dignity that a Muslim living in America has. As for Latinos and Asians, vast numbers of them from El Salvador to Korea regard America as the land of opportunity.

And when any of these people come here — from anywhere, speaking any language, looking like a member of any race — they are accepted as Americans the moment they identify as such. He or she will be regarded as fully American. This is not true elsewhere. A third-generation Turkish-German, whose German is indistinguishable from the German spoken by an indigenous German, will still be regarded by most Germans as a Turk. The same holds true elsewhere in Europe.

… Xenophobic? It is probably fair to say that most Americans are xenophiles.

… The left-wing drumbeat about America as racist is a combination of politics and black memory.

The political aspect is this: The Democrats and the left recognize that if blacks cease viewing themselves as victims of racism, the Democratic Party can no longer offer itself as black America's savior. And if only one out of three black Americans ceases to regard to himself as a victim of racism, and votes accordingly, it will be very difficult for Democrats to win any national election.

The other issue is black memory. Apparently, most blacks either cannot or refuse to believe that the vast majority of whites are no longer racist. Most Americans were hopeful that the election of a black president — thereby making America the first white society in history to choose a black leader — would finally put to rest the myth of a racist America. More than three years later it seems not to have accomplished a thing. I now suspect that if the president, the vice-president, the entire cabinet, the chairman of the Joint Chiefs of Staff, and all nine justices on the Supreme Court were black, it would have no impact on blacks who believe America is a racist society — or on the left-wing depiction of America as racist.

One can only conclude that the smearing of America's good name is one of the things at which the left has been most proficient.

Update: Katie Pavlich: Look around the world and you’ll find that America is the most tolerant and open society on earth 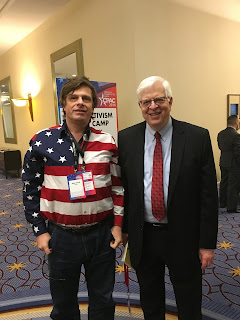