The banner of everyone who is sick of PC; Voting for Donald Trump is "all we can do is register a protest against the Dickensian nightmare that the elites have created for us" 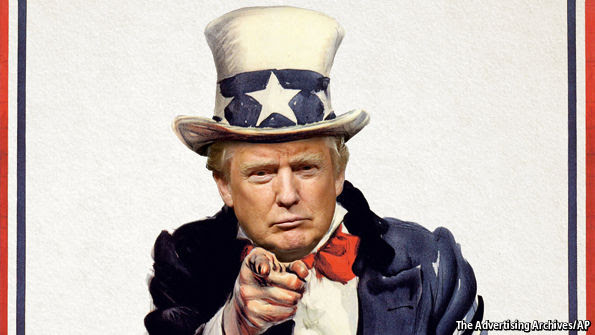 A reader reacts to a typical mainstream editorial in The Economist:


You used so much ink trying to convince us that Donald Trump is not fit for office (“Time to fire him”, February 27th). 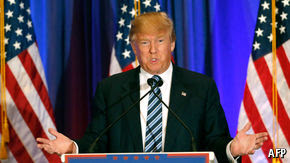 Do you think the type of person who reads your erudite publication would ever consider voting for him? Not likely. The people who will vote for The Donald are the disaffected bitter-clingers whom the last candidate you passionately begged us to vote for—Barack Obama—disparaged in his campaign. Those same disaffected people haven’t been doing well over the past eight years, and in case you haven’t noticed, they are mad as hell.

Government isn’t working for us. There are few good jobs, we’ve been 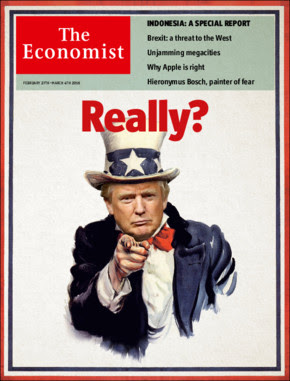 stuck with a joke of a health-care system, the few rights we still enjoy are under siege and the future looks dim for our children. We are powerless to foment a revolution while working two part-time jobs to make ends meet, so all we can do is register a protest against the Dickensian nightmare that the elites have created for us by voting. Apparently, nobody listened (Republican or Democrat) to what we were trying to say in 2012. Come November, you’ll be hearing from us again, louder and clearer.


… If you look past what he's saying, you can see he has become the banner of everyone who is sick of political correctness, sick of being called "racist" for expressing non-liberal opinions, and, most especially, sick of politicians who say whatever they need to to get elected, and then proceed to do whatever the people who paid for their campaign want.

It doesn't matter if Trump can't keep his promises. He is punishment for a party that has disenfranchised its political bases so much that they feel their only hope for having their interests represented is - the demagogue. He is punishment for politicians who have crossed a line in ignoring the wants of their voters (a line they always seem to want to get as close to as possible without going over). If it's any consolation, one of the insights from Bentley's "The Process of Government" is that demagogues, as politician coalitions, tend to fall apart as soon as they win power and begin to work out the details of what they're going to do.

But I chuckle every time I see some eight page refutation of Trumps economic policies. If that's how you're going to try and take him down, then I can safely say that Trump will end up doing whatever the forces of history have in store for him. Scholarly critiques will do nothing. …


Are you denying that a huge portion of Republicans distrust the Republican establishment, and that Trump is their protest candidate? Are you denying that Trump supporters are a coalition of people with notably different political philosophies, who are cooperating purely because of Trump's ability to bring people together as a demagogue? Evangelicals, moderates, blue-collars, white collar - these people aren't just voting for him, they're *excited* about voting for him. That's unusual.

If you want to find out what interests are in play here, listen to what Trump says. Look at what he devotes his emotional energy to when he speaks. Firstly, there is the wall - the illegals. Except this is really a proxy for two issues - the poor economy and lack of jobs, and the sense that Republican "culture" is diminishing in American society, because of the influx of foreigners.

There is the fact that Trump is not just criticizing political correctness, but putting his money where his mouth is - he is *being* politically incorrect. A large portion of the US feels that they cannot talk about their values, their political attitudes, without looking over their shoulder and talking in hushed tones. Even if I don't agree with everything Trump says, the fact that he can say it and not be ruined means that my beliefs, undoubtedly more moderate, are now safer to talk about.