Today, the International New York Times published my response to the Gray Lady's

front-page editorial, End the Gun Epidemic in America. (Are their any readers in the Big Apple who can confirm whether it was published in the domestic version of the newspaper?)


It is easy to tout the success of gun control laws in the rest of the Western world and to say that "this just doesn’t happen in other countries” when you ignore : the 1996 massacre of 16 children at a Scottish primary school; the 2000 killing of eight kids in Japan; the 2002 deaths of eight people in Nanterre, France; the 2002 killing of 16 kids in Erfurt, Germany; the 2007 shootings to death of eight people in Tuusula, Finland; the killing of 10 people at a Finnish university less than a year later; the 2009 killing of 15 people in Winnenden, Germany; and, needless to say, Anders Breivik's 2011 mass murder of 77 Norwegians, most of them teenagers.

Is it unrealistic to wonder whether the tolls would have been lesser had a few of the adults in each place — as well as in Paris's Bataclan a couple of weeks ago — carried a weapon and tried to shoot back at the respective killers?

FYI, that couple of sentences is a tiny outtake from my in-depth (and dispassionate) study on the issue of gun control. (Thanks to Glenn Reynolds for the Instapundit link.) 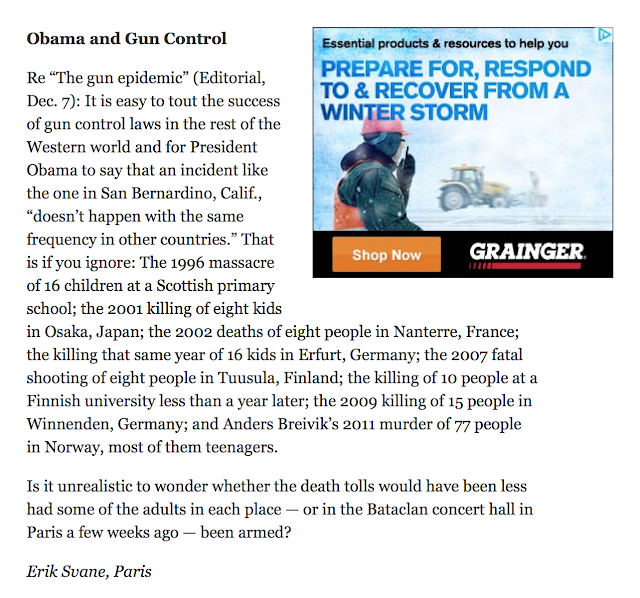 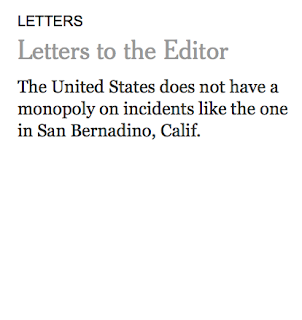 Related: Jon Gabriel's version of the editorial (End the Islamist Epidemic in America)
Posted by Erik at 10:59