"The terrorist threat has evolved into a new phase" says POTUS; Uh no, Obama, "less complicated acts of violence" started… way back, on Sept 12, 2001 The terrorist threat has evolved into a new phase

said Barack Obama from the West Wing, as reported by Washington Post's Chico Harlan, Elise Viebeck, and Katie Zezima (thanks to Instapundit), explaining that


As we’ve become better at preventing complex multifaceted attacks like 9/11, terrorists turn to less complicated acts of violence like the mass shootings that are all too common in our society.

Uh, no, Mr. Obama, those less complicated acts of violence were — of necessity — turned to way back, as long ago, in fact, as September 12, 2001, to be precise (i.e, before Dubya had even completed his first year in the White House). Just about every attempted act of terrorism (sorry, of work-related violence) since then, both in America and abroad, has — again, of necessity — been carried out in exactly that relatively "low-key" fashion.

In other words, "a new phase" is suggesting that all Obama's actions until now were fine and appropriate with the old(er) phase allegedly in existence until December 2015.

But there's more: with "the mass shootings that are all too common in our society", Obama gets to direct his attacks away from foreigners and towards America and the country's inhabitants.

Here are the additional messages from the Oval Office:

• I am (as usual) doing everything possible as Commander-in-Chief. Too bad that the Republicans in Congress are holding me — are holding us — back.

• We must not let Americans' racism get out of control.

Hardly anything out of the ordinary, huh?


His main objective in this speech appeared to be disassociate Islam entirely from ISIS/ISIL and make sure that people on a list that included Ted Kennedy were prevented from buying a gun.

He contradicted himself on the SB shooters. First he said there was no evidence they had been directed by others and 10 minutes later he cautioned that they were radicalized by others.

And oh btw - he very slyly admitted that Ft Hood was a terrorist attack after six years of calling it workplace violence.

Also - it only took him seven years to ask Muslims to help police.

And claiming he's the man to protect America and never once mentioning illegals coming in droves over an uncontrolled border......lol

The clown has no shame.

In the comments, Eagle Soars asks:

Did you catch it? The shooters were 'victims'.

And even as we work to prevent attacks, all of us—government, law enforcement, communities, faith leaders—need to work together to prevent people from falling victim to these hateful ideologies.

I think to some extent the speech was directed to the next election, telling whatever is left of his base what they want to hear. 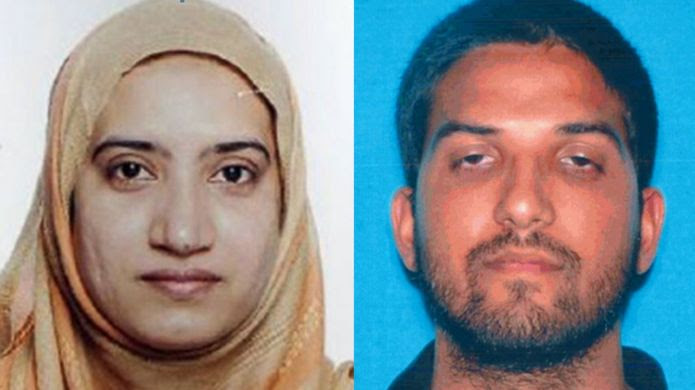