2002 Was Once Considered Funniest Onion Year On Record, Man In 2013 Remembers Wistfully 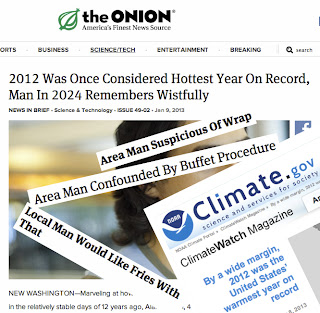 This particular "area man" recalls when the Onion was a must read in terms of satire and humour. Quite libertine in their former outlook, the publication skewered and hoisted all comers, regardless of ideology or fetishistic cause. Alas, those were the days. From an American perspective, the Onion today is rapidly paralleling previous demises of television shows such as M*A*S*H (pre Alan Alda takeover = funny; post = not so funny) or the Daily Show (Craig Kilborn = funny; Jon Stewart = dreadful). The demise is quite evidently driven, "stop taking on all sides and become part and parcel of a single echo chambre", in other other words, become agenda-driven hacks.

To wit, today's offering on show:


NEW WASHINGTON—Marveling at how dire things seemed in the relatively stable days of 12 years ago, Alan Gibson, 41, a local man of the year 2024, wistfully recounted on Wednesday the then-record temperatures recorded in the United States in 2012. "To think that we were concerned about a 55.3-degree average is almost comical, but then, I guess at that point we must have still had some kind of perceivable ozone layer," Gibson said fondly while reapplying the full-body coat of UV-resistant resin he and his fellow citizens of the 43 contiguous United States wear at all times. "Today, you wouldn't think twice about a 96-degree day in the middle of February, but a mere decade ago you would look up at the skies waiting for snow. Christ, those were the days, man." Gibson then recounted at length to reporters the story of how he and his family narrowly escaped the Eastern Seaboard during the abrupt and tragic events of March 2019.

It reminds me of Bart Simpson trying to re-capture his 15 minutes of "I didn't do it!" fame with his follow-up catchphrase "Woozle Wuzzle", just doesn't have the same comedic heft. As it is understood, humour must have several elements, key among them an element of the truth. Too little truth and the joke is so subtle as to pass unrecognised, too much truth and the joke is a ham-handed pie in the face. As such, the Onion today neglects the truth entirely with its eco-scare ha ha. After all, where were the pointed satirical barbs from the Onion related to the annual State of the Climate reports which previously showed: