Shocker: BBC Surprized That Toulouse Killer Is Not a White Rightist But an Arab Muslim Linked to Al Qaeda

Does this fit in with the general profile because I thought that there was much more of a preference for a far right suspect — rather than somebody coming from an extreme Muslim background?
— befuddled BBC presenter (01:34) 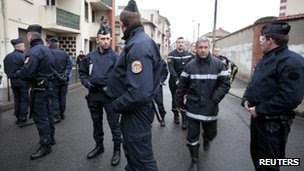 A "preference"?! Right: it would have been better — so much better — for the Left's narrative had the killer of three French soldiers and four Jews in Toulouse (three of them children under 7) been a white racist in the Christian mold, à la Anders Breivik, to be exploited in Gabby Giffords fashion…

Mainstream media outlets are having to backtrack (see the New York Times' initial presentation of the event as well as the Left's "professional" anti-racist group's spin) in light of news that French police have surrounded a house that belongs to a Middle East "youth" affiliated with al-Qaeda. His mother, of Algerian origin, has been brought in to discuss surrender terms with the man, who has said he wanted to avenge the deaths of Palestinian children.

It is never a bad time to remember the words of Gilles-William Goldnadel:

it is clear that the Jewish blood that has flowed since the Second World War has not been at the hands of the extreme right but more at those of the New-Age anti-Semitism linked to Islam or the Middle East conflict.