George Whitman, the American-born owner of Shakespeare & Company, a fabled English-language bookstore on the Left Bank in Paris and a magnet for writers, poets and tourists for close to 60 years, died on Wednesday in his apartment above the store 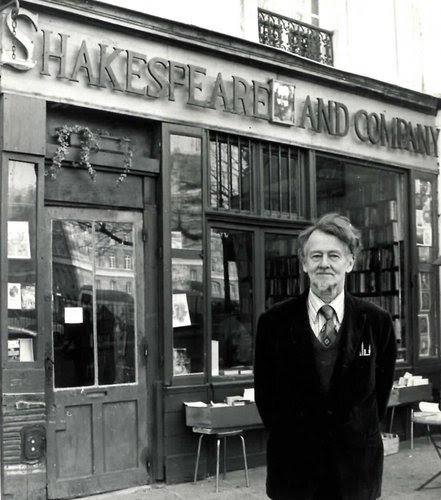 More than a distributor of books, Mr. Whitman saw himself as patron of a literary haven, above all in the lean years after World War II, and the heir to Sylvia Beach, the founder of the original Shakespeare & Company, the celebrated haunt of Hemingway and James Joyce.

As Mr. Whitman put it, “I wanted a bookstore because the book business is the business of life.”

Overlooking the Seine and facing the Cathedral of Notre-Dame, the store, looking somewhat beat-up behind a Dickensian facade and spread over three floors, has been an offbeat mix of open house and literary commune. For decades Mr. Whitman provided food and makeshift beds to young aspiring novelists or writing nomads, often letting them spend a night, a week, or even months living among the crowded shelves and alcoves.

He welcomed visitors with large-print messages on the walls. “Be not inhospitable to strangers, lest they be angels in disguise,” was one, quoting Yeats. Next to a wishing well at the center of the store, a sign said: “Give what you can, take what you need. George.” By his own estimate, he lodged some 40,000 people.

…Mr. Whitman was famously frugal and expected the bibliophiles residing in

his store to work a few hours every day sorting and selling books. Yet he also invited uncounted numbers of people for weekly tea parties to his own apartment, or for late-night readings enriched with dumplings or pots of Irish stew.

Some guests later described him as a kind and magnetic father figure to needy souls but also as a man who could throw tantrums and preside over the store’s residents, sometimes up to 20 people, like a moody and unpredictable dictator.

Mr. Whitman had variously called himself a communist, a utopian and a humanist. But he may have also been a romantic himself, at least concerning his life’s work. “I may disappear leaving behind me no worldly possessions — just a few old socks and love letters, “ he wrote in his last years. Paraphrasing a line from Yeats, he added, “and my little Rag and Bone Shop of the Heart.”