As Instapundit reports the Gore Effect striking the Cancún Climate Conference, what have been the news from Europe, recently?

In Britain, Wales saw its coldest ever November reading; in Germany, Der Bild reported the coldest start to December for centuries (!); 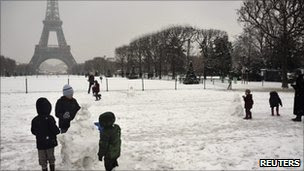 and here in Northern France, today, snow has been falling all day long, paralyzing the entire Paris region, causing both of the capital's airports to shut down (temporarily), and closing the Eiffel Tower while making the landmark totally invisible from across the Seine (01:08).

Thousands of passengers are blocked at airport terminals, bus traffic has been "basically paralyzed" since early afternoon, secondary routes in the Paris region are described as "catastrophic", traffic jams are expected to be as long as 300 km, and some 50 communes will be opening shelters for stranded drivers through the night.

To make the news more jolly, the authorities are afraid that the electrical networks will fail (which can only remind us of the Instapundit post on "the compassion of the Welfare State on display" in Europe)…