The “Context” was a Brutal, Left-Wing Fascist State

Oscar-winning director Oliver Stone in an interview decried what he called the Jewish lobby's control over Washington's foreign policy and said that Hitler's actions should be put "into context.”

Oliver Stone, have long lost an audience in the North America is obviously reaching out to Europe and the Near East when he makes the Hitler made the trains run on time kept the gas chambers running argument:

On Hitler, Stone said that the German leader “did far more damage to the Russians than the Jewish people, 25 or 30 million. Hitler was a Frankenstein, but there was also a Dr. Frankenstein -- German industrialists, the Americans and the British. He had a lot of support.”

As if that makes it okay. After all, when you’re a died in the will agitational revolutionary trying to crash test civilization until it turns into a authoritarian state, human rights means human rights for SOME with whom you feel politically warm to, and not those of the individual’s rights.

Demonize him? Sure. He earned it with his moral illiteracy.

Stone recently completed a documentary on Venezuelan President Hugo Chavez and is working on a documentary series about American history.

It follows a familiar pattern: parrot some patriotism only in a “Born on the 4th of July” context, so long that it degrades society, turn the murder of JFK into a history lesson in factually absent cabal conspiracy, rattle on about “an American empire”and so forth. All for “the cause” of reconstructing “the context” around some people and ideas, but not others. Yadda yadda. Basically, it’s a repetition of Nazi propaganda. 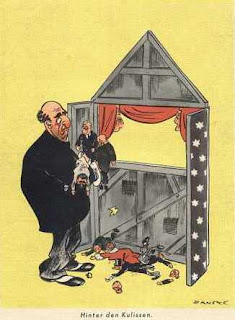 ”Lustige Blätter” (the Nazi funny pages), circa 1942. The caption reads: "Behind the Curtains." A Jewish puppeteer is looking nervously at his remaining puppets: Roosevelt, Churchill, and Stalin. On the floor are broken former puppets, including Neville Chamberlain.

For Stone, it’s okay, because Nazism was just another form of the Marxist-Leninism that he tacitly promotes and advances the cause of.
Posted by Joe at 08:30