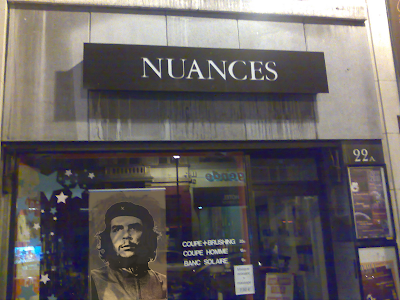 Our brothers and sisters to the south of here are hotting things up a bit:

First they kidnapped their bosses; then they threatened to blow up their own factories. Now, in the latest phase of France's summer of discontent, disgruntled workers are turning to environmental blackmail as a stick to beat the management into submission.

Angry lorry drivers at Serta, a struggling transportation company, are threatening to pour more than 8,000 litres of toxic fuel additive into the Seine if their demands for redundancy pay-offs are not met. Acknowledging the "dramatic" effect this could have on the river's fish population, they insist they will not be dissuaded unless their bosses give in.

"It's less dramatic than ... people being made redundant and sacrificed," Jean-Pierre Villemin from the CFDT union told French radio. "It's the only means we have of getting what we want."

No doubt Greenpeace is breathing fire on the mere suggestion, right?

Antoine Faucher, campaign director of Greenpeace France, said the threats, though worrying, were in fact a reflection of growing concern for the environment. "It's significant because today, perhaps unlike previous years, the environment is recognised in itself as a resource," he said. "To take it hostage may be of greater value now than it was before."

Now, a question ..... Would Greenpeace have the same laconic/nuanced reply if an official and respected firm threatened to employ the very same tactique de négociation?

No penalty for guessing.
Posted by Georges at 12:48