Employing “tolerance” as a subtext on an authority structure and population not intimately familiar with what the bounds of rights really are in a tolerant society, we find a great many sad struggles, a tugging and pulling among individuals in the face of an intellectual environment not equipped or sophisticated enough to manage it. From the Netherlands as an example we find an elbowing out of a population by visitors who appear to come from another century using the tools of a modern society that intends to structure legal fairness as a hammer, and a majority giving up on its’ tenets to buy a little peace:

Chris Ripke is a well-known artist in the city. His studio is near a mosque in Insuindestraat. Shocked in 2004 by the murder of director Theo Van Gogh by an Dutch Islamist, Chris decided to paint an angel on wall of his studio and the biblical commandment "Gij zult niet doden," thou shalt not kill. His neighbors at the mosque found the words "offensive," and called the mayor of Rotterdam at the time, the liberal Ivo Opstelten. The mayor ordered the police to erase the painting, because it was "racist." Wim Nottroth, a television journalist, camped out on the spot in protest.

Though the title would seem overreaching in an article entitled “Eurabia Has A Capital: Rotterdam”, there are among the portraits being painted in it some telling signs that the native western Europeans are being put upon directly, and in a way that skirts the limits of what they will permit without signaling to themselves a need to act.

The fact that Eurabia has arrived in Rotterdam has been demonstrated by an episode in April at the Zuidplein Theatre, one of the most prestigious in the city, a modernist theater proud of "representing the cultural diversity of Rotterdam." It is located in the southern part of the city, and receives funding from the municipality, headed by a Muslim, the son of the imam Ahmed Aboutaleb. Three weeks ago, the Zuidplein Theatre allowed an entire balcony to be reserved for women only, in the name of sharia. This is not happening in Pakistan or in Saudi Arabia, but in the city from which the Founding Fathers set out for the United States. It was from here that the Puritans disembarked in the Speedwell, which they later exchanged for the Mayflower. This is where the American adventure began. Today, it has legalized sharia.

For a performance by the Muslim Salaheddine Benchikhi, the Zuidplein Theatre agreed to his request to have the first five rows set aside for women only. Salaheddine, an editorialist for the website Morokko.nl, is known for his opposition to the integration of Muslims. The city council has approved this: "According to our Western values, the freedom to live one's own life by virtue of one's convictions is a precious possession." A spokesman for the theater has also defended the director: "It is hard to get Muslims to come to the theater, so we are willing to adapt."

Never mind that this isn’t diversity, it’s a minority monoculture trying to subsume it’s accommodating neighbors for the purpose a the very least of the pride of imagined conquest, and at the sharp end, a real conquest. 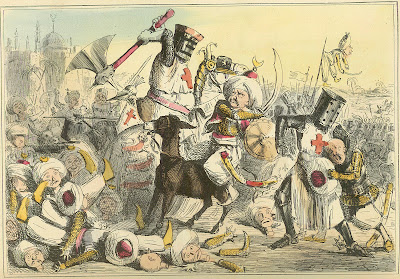 Lost on the writer even, is the same of the chap interviewed, and the inherent aggression embedded in it. The editor of Morokko.nl is name is Salaheddine, which is not a conventional given name of any sort, and not likely his real name at all. In proper Arabic it’s pronounced Solh-ed-deine or Duke Solh (with a hard H). In it’s anglicized form, it’s Saladin, the Muslim general who drove the Crusade era Christian Kingdom of Jerusalem, and the Frankish knights in particular. Moroccan or not, the naming of oneself after an 11th century muslim general displays its’ own lack of depth on another level: Saladin was a Kurd who “united” a large part of what is what is now the Arab by subsuming it in war, himself a cultural outsider. I’m sure to those who would recall him today, that it’s only results that matter – well, SOME selectively drawn results that matter.

In short, it’s a nom de guerre that even the article’s author shows overlooked, but doesn’t miss this point: what we are looking at is the uninspired sectarian warfare of the malicious and ignorant, something common to the developing world, the 3rd world, and those suspended in the lawlessness of war-zones. The broadly and deeply developed level of European social science is absent, having struck the immutability of a culture that while a lot less comfortable and welcoming, is readily accessible to the simplest minds and to the emotionally bereft.

And as is quite common in the case of France par example, the most politically involved don’t call themselves French, and discuss “muslim rule” in the millennium-old sense of a culture defeating and annexing another. Here they are thinking in terms of the ‘takeover’ of open society, not serious involvement IN it or with it. One can only imagine what they will want to do with the French of Vietnamese and Chinese origin who are themselves rather aware as a group of what oppression smells like.
Posted by Joe at 11:57