We are either stuck in their melons, or the thinly-veiled Iranian government propaganda operation is trying to employ the reflexes of the most gullible among the left to advance the cause of totalitarian illiberalism. The very sort who “don’t want you in their bedroom” eventually preferring Sharia. 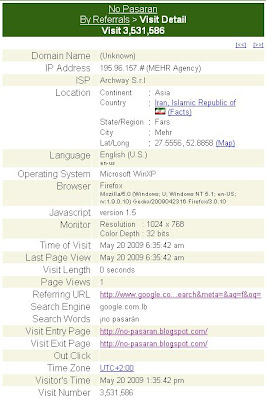 The Iranian “Mehr News Agency” seems to have taken an interest in our editorial committee here at the HQ. If you don't know who they are, realize that they are an out-and-out propaganda outfit from the Islamic Republic of Iran that only a Spanish graduate student would believe is a genuine news operation. The irony being that they are so 4th rate that they have to navigate modernity using a Lebanese ISP. Nonetheless, we are to believe of the parent company, which is to say the regime, that this sort of outreach will light the world up to praise their brilliance and gentility:

Ahmadinejad told foreign reporters that if he is reelected president, he will invite Obama to a debate on the root causes of global problems.

He went on to say that he had invited former U.S. president George W. Bush to hold talks on global issues when he was in New York to address the 63rd session of the United Nations General Assembly on September 23, 2008.

The Iranian president also said all people and major powers should change their approach toward global issues because this is the only way to establish lasting world peace.

President Ahmadinejad also pointed out that there is no need for nuclear negotiations with Western countries, saying, ""Iran's nuclear issue is over, in our opinion.""

Where else, other than a population dumbed down by two decades of mental manipulation would a population believe that their leader, a social and economic nitwit, have “lessons about world peace” for the rest of the world. They must have learned this habit of “rayonnement” from the world’s greatest lesson-givers. But hey, no hard feelings, Mehr News noses! Lekhaim, baby!
Posted by Joe at 10:26