As if there was a way to grade them...

Anticipating the revolutionary wave of people agreeing with them, roving bands of masked anti-capitalist paranoiacs roved the streets of DC in and around last weekend’s IMF leaders’ meeting.

As they are wont to do, they destroy property, something they believe should be the “peoples’“ property, but like whatever. They chose to vandalize a pair of ATM machines, even though the proletariat trying to withdraw from ‘the man’ the pittance of their blood, sweat, and tears. Oddly enough they hit up Amalgamated Bank, a.k.a. “Labor’s Bank” or as the banking choice of the non-profit political profiteers of the activism racket, which statistically makes it the favorite bank of the Suffering Sisters of Sappho. 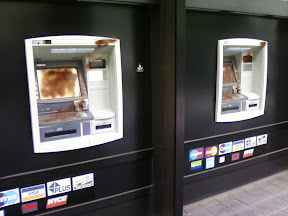 Even the special must suffer to make a perfect society, where everything is free. It’s the part about what growing your own organic food would do to the collective farm that I still can’t get.
Posted by Joe at 17:05