Or as much of Europe thinks when it isn’t telling itself it knows better, the value of an innocent life is based entirely on which political tribe you are perceived to belong to. From the Deutsche Welle story on the trial of the gang that kidnapped, brutally tortured, and then murdered Ilan Halimi because he was a Jew, we find a kind of racial defense hiding inside a racial defense:

Some claim they didn't know what they were doing

For the rest of the gang, hostility towards Jews is not believed to be a factor in them taking part in the horrendous crime.
"My client had no idea who had been kidnapped," said Didier Seban, the lawyer for one of Halimi's abductors. "It had no bearing on him. His involvement was stupid, he's very easy to influence, Fofana called him the 'little one'."

In other words, not only is was his murder founded entirely on his heritage, so must go the argument of the defense. Is the gang and its’ ringleader to be less guilty because they didn’t account for Hilami’s Jewishness? In the simplistic world of European public morality, that’s often the case, and it has a purpose: to resent that imagined protected category at the same time.

So the press reports like so many other features of public though is little more than a cultural covering action to allay the obvious observations that people would otherwise have to make of themselves.

But let’s not forget the society we’re talking about. A news search engine lists 422 stories following the trial in France, where the crime took place, not even twice as much outside of France where it has little cultural meaning. It’s a strong indication that in France people really don’t want to be reminded of the affair. The “progressive” Rue89, the stated protectors of the human race, has run 9 hits, all but 3 wire pieces and one an irrelevant reader comment about homophobia which read like light entertainment gossip columns for neo-fascists. The other two only cite his name, but rattle on about LePen and Dieudonné. On the other hand, the front page of their portal seems obsessed with another “cultural covering action” – trying to diminish the sympathy anyone would have for the center-right government’s Rashida Dati – implying that the high-tech lynching she’s been going through, (that it isn’t), a piece on the year old Cadaver Exhibit that we were supposed to assumed scandalized everyone but them, and an interview with Jacque Tati.

Truly biting and up to the minute stuff for the socially aware and politically active political novacane for lefties . 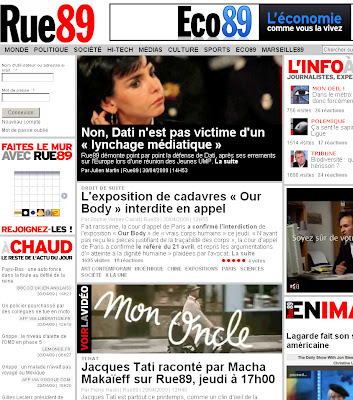