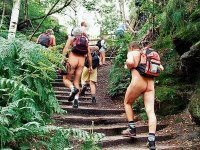 Following up from our initial discussion in January, all good things come to an end it seems:

Voters in the heart of the Swiss Alps have passed legislation banning naked hiking after dozens of mostly German nudists started rambling through their picturesque region.

The cantonal government recommended the ban after citizens objected to encountering walkers wearing nothing but hiking boots and socks.

"The reactions of the population have shown that such appearances over a large area are perceived as thoroughly disturbing and irritating," the government.

For those still needing their fix of disturbing and irritating naked Germans, a majority of the NP staff recommends the spa facilities at the Crowne Plaza in Heidelberg.
Posted by Georges at 11:11