Pat Robertson said it once, Chavez says it annually

Frontpagemag.com ran an article some time back that helps up but into context what a complete crackhead Hugo Chavez really is:

«-- In 2002, in an effort to mitigate the effects of a Strike, BBC reported Chavez’s claim that American malefactors were looking to eliminate him as he flew back from a goodwill tour of Europe. Does this ring a bell? “They were hunting us, waiting for us,” Chavez said at the time.

-- In September 2003, Chavez warned the world that he was under threat of elimination yet again. According to Reuters, Chavez claimed that “Venezuelan terrorists” were being trained on American soil before wrapping himself in the US flag by invoking the Terror War in his own defense: “"Over there, in U.S. territory, people are conspiring against Venezuela, terrorists are being trained. If they are really fighting terrorism as they say, they should act against these terrorists who are threatening Venezuela," Chavez said. 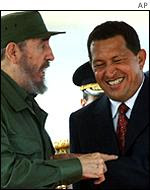 -- 2004 apparently was a bull market for assassination attempts also. In May of that year, Chavez again decried attempts by the US to end his reign by stopping his heartbeat.»

No “secret armies” no assassination attempts, no malefactors since 2002 have shown themselves. Ah, but they’re SECRET! Don't you SEE!

When they talk about keeping a population dumbed down with lies, I think we have finally found some proof that it’s possible. It’s a horrible strategy.

It prompts a question. Where do children get these things?