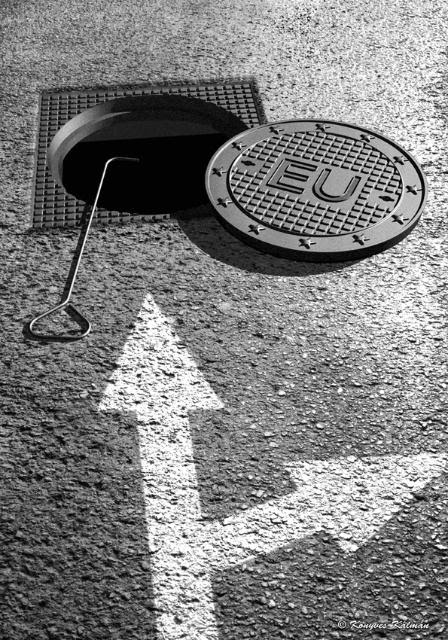 What little reaction there is, that is...

It’s not so much “nyah-nyah,” it’s more like “good for them.” Having a low view of people’s abilities they maintain a giant welfare state to support middle and upper income citizens too. They decry the fact that they shouldn’t even have HAD a referendum, a la “let them eat cake”!
It’s the condescending view of people, their “cattleness”, if you will – their endless source of invented crices like “aid for Africa” and “fair trade” when they are being starved by unquestioned appalling trade restrictions.

«It is greater satisfaction to me that the founders of modern democracy, the Dutch, voted against the EU. The immediate beneficiaries are the vintners in Champagne. Their bubbly wine is being lavishly enjoyed in Washington D.C., London, Tel Aviv and Jerusalem.»

The lesson to take away from this? Rewrite the damn thing! The difference between a “Yes” supporter and “No” supporter is that the “No” folks were more likely to have read it on their way to that conclusion.

«That is simply great news. In recent years the entire EU project - at least in Western Europe - has taken on an anti-American flavor. Gerhard Schroeder and Jacques Chirac - the lame duck and electorally doomed leaders of Germany and France, respectively - have kept their political engines running on the fumes of anti-Americanism in recent years. The EU project has been sold as a means of counterbalancing the American "hyperpower," as the French call it. If a project with that kind of billing stumbles - and stumbles badly - and if anti-American nags like Schroeder and Chirac take it in the pants in the process, there can be no more appropriate response from the intelligent American than to dance a jig, do a shot, and wave the giant foam "We're #1" finger in the air.»

The problem with the “foreign policy” is that since the end of the cold war, that France and particularly Germany don’t have an identifiable international affairs policy. They have tactics, mainly spoiling and triangulation tactics, they have an image that they want to sell at home which the HOPE will work abroad, but no real policy.

«Indeed, once we get that out of our system, there's a great deal we should be cautious about. The EU Constitution didn't fail because of widespread pro-American sentiment. It failed because French and Dutch voters saw their national - and personal - interests at odds with the constitution. The last thing we should do is distract European voters' attention away from the economy, immigration and the like by making them angry at us. Gloating would only invite precisely the sort of anti-American pique Chirac and Schroeder have exploited since before the Iraq war.

While it's true that the proposed constitution reads like a Xerox machine repair manual, the voters aren't that confused. France's bourgeois welfare state would have to be unraveled under the new regime, while comparatively free-market Britain would find its economy pulled toward greater statism.

Add the fact that the document itself is impenetrable and you can hardly blame voters for erring on the side of caution. You don't roll the dice when you might potentially be voting away your sovereignty and lifestyle. For the record, though, the constitution is no free-market tract - if Adam Smith were alive, he'd spontaneously burst into flames if he read it.»