Better to oppose Bush and America's allies — I meant: better to fire broadside after broadside on Bush and America's allies, unceasingly — all the while railing about the evils of capitalism, than do anything about countries as bad as Saddam's Iraq and crimes of any government but those linked to Uncle Sam and/or spend time detailing the humanitarians' (i.e., one's own) links with such régimes. (Here — thanks to Chrenkoff — is more news that Europe's media thinks fit to largely overlook…)


As David und Ray would say:

biased journalism as usual: Human rights abuses are condemned if the US government is involved. If not, if it's just plain vanilla torture without connection to the US government, reporting hits a dull streak.

Which brings us to this other news from Africa (thanks to Stavn Piranha), which has been largely absent from the pages and airwaves of France:

Rwandan government officials claim that new proof of France's role in the 1994 Rwanda genocide has emerged during the UN's Rwanda court hearings. Not only was France training the genocidal militias prior to the genocide, the French government was even today providing perpetrators of the genocide a refuge. France has earlier been criticised by a European court for not trying genocide suspects. 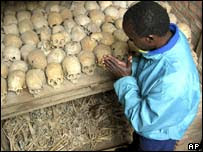 Aloys Mutabingwa, the Rwandan government's envoy to the UN-backed International Criminal Tribunal for Rwanda (ICTR), … repeated the more known allegations that France keeps interfering with justice by providing a shelter for suspected genocide perpetrators. Several main suspects are still said to be at large in France, allegedly under the protection of the Paris government.