See? We told you that Washington's ill-conceived and mistake-laden intervention would only fan the embers of hatred, drive Arabs and Muslims to unite against America, and lead to the burning of flags and widespread demonstrations against Bush's shameful foreign po — wait a minute! 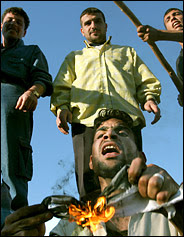 After a report in a Jordanian newspaper that [Ahmed al-Banna] was responsible for the bombing on Feb. 28 in Hilla, where more than 130 people died, Iraqis erupted in anger.


On Monday, hundreds of Iraqis swarmed around the Jordanian Embassy in Baghdad, denouncing the country's leader, King Abdullah II, and defacing a Jordanian flag. A similar crowd marched in Najaf, near the home of Iraq's top Shiite religious leader, Grand Ayatollah Ali al-Sistani, who on Sunday accused Jordan of interfering in Iraq's internal affairs. The allegation has even strained official relations.


"We were surprised by the news about the family of the criminal terrorist Raad Mansur al-Banna celebrating his mean terrorist act, taking pride in that," said a statement by the office of Iraq's interim prime minister, Ayad Allawi.


The incident struck a raw nerve for Iraqis, who have been beleaguered by dozens of suicide bombings that have killed thousands of civilians. Iraqis often blame foreigners for the attacks, and neighboring countries for flooding their country with terrorists. …


In the case of Mr. Banna, the most inflammatory allegation in the Jordanian newspaper article was that his family had staged a celebration last week, inviting their countrymen to congratulate them for their son's heroic act. …