a Reuters piece states in the International Herald Tribune (no link).

Ministers of Germany, the Netherlands, Belgium, Austria and Luxembourg agreed … in Brussels to the principles of the accord, which spells out new ways to intensify the fight against terrorism and other crimes by sharing DNA profiles, fingerprints and personal data on suspects. …


But Spain, which lost 191 people in the March 11 bombings blamed on Islamic terrorists, was not among the initial signatories. … Prime Minister José Luis Rodriguez Zapatero … dodged the issue when asked about it at a news conference.

Nor is it the el caniche de Chiraque's policy to criticize the Ivory Coast. And Sudan. And Somalia. And Iran. And North Korea. Etc…


But Uncle Sam? And America's allies? 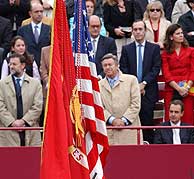 
A month ago, John Vinocur wrote in the IHT that Bambi had gotten mostly nothing from returning Spain to the EU rank and file. Seems like his lucky streak is continuing…


Meanwhile, the last word belongs to Jaime Mayor Oreja, who effectively turned the Socialists' charge of "lying" on its head. "If this is what returning to Europe is," the Popular Party's leading candidate in the European Parliament elections said, "it is a fraud and a lie."


Did Zapatero really say this? What's the source, if you don't mind my asking?

No problem.
The item comes from an article published in The Economist immediately after Bambi's victory.

By the way, did you read about Zap's medal ceremony?