"Even if Saddam has these weapons, so what?"

The French simply didn’t consider Iraqi weapons of mass destruction a threat. It was an attitude that I would hear repeated again and again by French officials and politicians from all sides of the political debate. “Even if Saddam has these weapons, so what?” was the refrain. “He has never threatened France.”

Friends of Saddam has a long excerpt from Kenneth Timmermann's The French Betrayal of America. 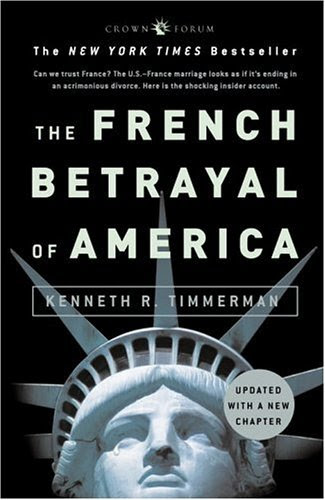 In April 2000, Indict [a non-profit organization partially funded by the U.S. Congress under the Iraq Liberation Act of 1998] had organized an international conference in Paris, to raise awareness in the French media of the horrendous human rights record of Saddam’s regime. They brought in victims of torture, who described in detail the methods used by Saddam’s eldest son Uday and the security services to punish suspected enemies. (One of Uday’s favorites was to plunge his victim into a vat of acid and listen to him scream as the acid burned off his skin). Indict had gathered testimony from survivors of the poison gas attacks on Kurdish villages, and had interviewed parents who had been forced to watch as their children were raped before their eyes. … The litany of horrors uncovered by Indict, compiled into evidence books against some two dozen top Baath Party members, was overwhelming. And it was systematically ignored by the most of the French press.