Days after Hollande sternly told the U.S. to stop spying on its allies, Le Monde disclosed that France has its own large program of data collection, which sweeps up nearly all the data transmissions that come in and out of France

Figuring prominently on Le Monde's website, French outrage is back over America's secret services and how the NSA is spying on France, spurring a Le Monde editorial and protests from the French government. 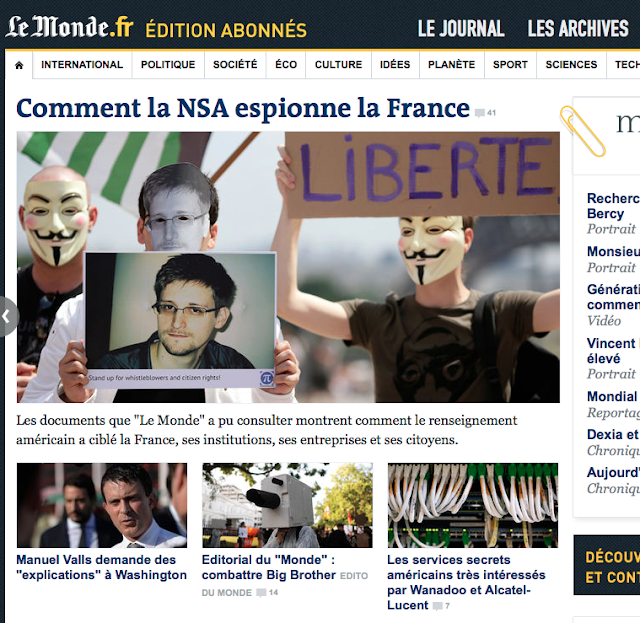 The only problem with that, of course, is that Le Monde itself already revealed two months ago — as did Le Canard Enchaîné — that France is as deeply engaged in the spying business as much as anyone.


Days after President François Hollande sternly told the United States to stop spying on its allies,

the newspaper Le Monde disclosed on Thursday that France has its own large program of data collection, which sweeps up nearly all the data transmissions, including telephone calls, e-mails and social media activity, that come in and out of France.


Le Monde reported that the General Directorate for External Security does the same kind of data collection as the American National Security Agency and the British GCHQ, but does so without clear legal authority.

… Le Monde’s report, which French officials would not comment on publicly, appeared to make some of the French outrage about the revelations of Edward J. Snowden, a former N.S.A. contractor, about the American data-collection program appear somewhat hollow.

But French officials did say privately on Thursday that there was a difference between data collection in the name of security and spying on allied nations and the European Union. While French officials have said that they do not spy on the American Embassy in France, American officials are skeptical of those reassurances, and have pointed out that France has an aggressive and amply financed espionage system of its own.

at the American ambassador’s residence in Paris that Mr. Hollande’s demands for clear explanations about the reports of American spying were justified because “such practices, if proven, do not have their place between allies and partners.” He said that “in the name of our friendship, we owe each other honesty.”

… American officials had privately warned French officials to be careful about speaking with too much outrage about American espionage given that major European countries like France spy, too, and not just on their enemies.

• Grand Frère Comes To France: "Phone Calls, Emails, Web Use" All Spied On 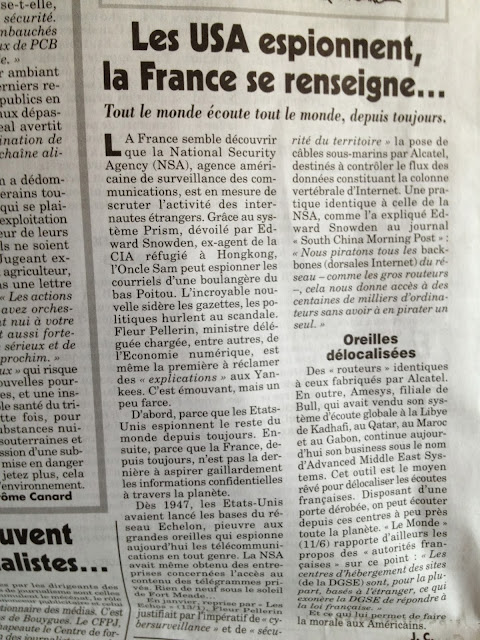