Should one feel impressed? And flattered? Or amused?

(And should we put the question to Nigel Farage?) 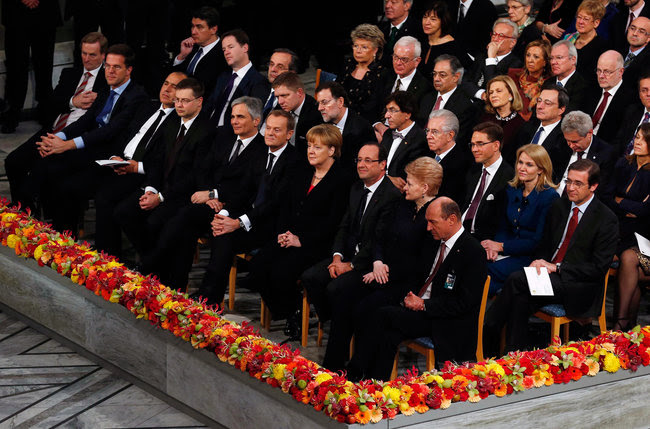 While accepting the Nobel Peace Prize for the European Union in Oslo’s City Hall a couple of weeks ago, Herman Van Rompuy quoted Abraham Lincoln in his acceptance speech.

As reported by Andrew Higgins in the New York Times, the president of the European Council said: “If I can borrow the words of Abraham Lincoln at the time of another continental test, what is being assessed today is whether that union, or any union so conceived and so dedicated, can long endure.”

Besieged by economic woes and insistent questions about its future, the European Union accepted the Nobel Peace Prize on Monday with calls for further integration and a plea to remember the words of Abraham Lincoln as he addressed a divided nation at Gettysburg.

The prize ceremony, held in Oslo’s City Hall and attended by 20 European leaders as well as Norway’s royal family, brought a rare respite from the gloom that has settled on the European Union since the Greek debt crisis exploded three years ago, unleashing doubt about the long-term viability of the euro and about an edifice of European institutions built up over more than half a century to promote an ever closer union.

Unemployment — now at over 25 percent in Greece and Spain — and sputtering economic growth across the 27-nation bloc are “putting the political bonds of our union to the test,” Herman Van Rompuy, president of the European Council, said in his acceptance speech. “If I can borrow the words of Abraham Lincoln at the time of another continental test, what is being assessed today is whether that union, or any union so conceived and so dedicated, can long endure.”

The European Union, said Mr. Van Rompuy, will “answer with our deeds, confident we will succeed.”

“We are working very hard to overcome the difficulties, to restore growth and jobs,” he continued.

Aside from economic misery, the most serious threat to the bloc so far is growing pressure in Britain for a referendum on whether to pull out of the union. The British prime minister, David Cameron, did not attend the ceremony, but most other European leaders showed up, including Chancellor Angela Merkel of Germany and the French president, François Hollande, who sat next to each other and whose countries, once bitter enemies, have been the main motors driving European integration.

Instead of the customary Nobel lecture delivered by the winner, Mr. Van Rompuy and Mr. Barroso each read parts of what Thorbjorn Jagland, chairman of the Norwegian Nobel Committee, described as “one speech but two chapters.”

Mr. Barroso spoke of the horrors of past wars and tyranny and Europe’s efforts to overcome them through the building of supranational institutions, which began in 1951

with the establishment of the European Coal and Steel Community by France, Germany and four other countries. But he also cited the current conflict in Syria, describing it as a “stain on the world’s conscience” that other nations have “a moral duty” to address. The European Union’s member states are themselves divided about how far to go in supporting opponents of Bashar al-Assad, the Syrian president.

The decision to honor the European Union with the Nobel Peace Prize stirred widespread criticism in Norway, whose citizens have twice voted not to join the union. On the eve of Monday’s award ceremony, peace activists and supporters of left-wing political groups paraded through the streets of Oslo, carrying flaming torches and chanting, “The E.U. is not a worthy winner.”

Many peace activists say they have no problem with European integration but question whether the union has lived up to conditions laid down by Alfred Nobel, the 19th-century Swedish industrialist who bequeathed the peace prize and four other Nobel Prizes.