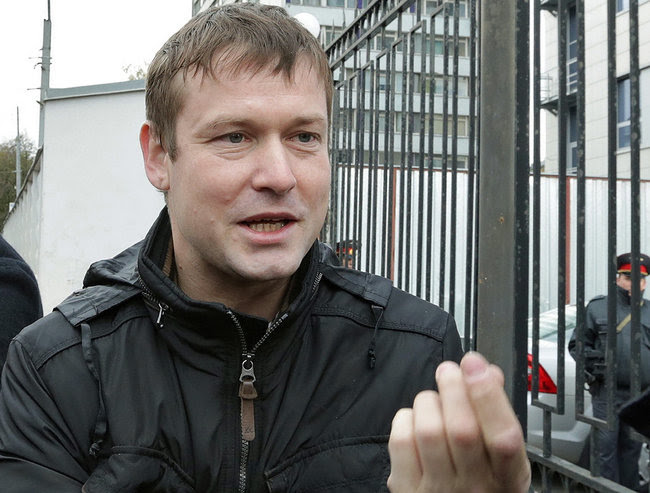 For two and a half days in October, Leonid Razvozzhayev, a little-known leader of the Russian political opposition, moved furtively from one part of Kiev to another, meeting with political allies and human rights experts about seeking asylum in the West. At times, he was sure he was being followed. He was right.

Thus writes David M Herszenhorn in the New York Times as the mainstream media again ignores Barack Obama's infatuation with Russia (see third debate with Mitt Romney) and his willful ignorance of the Kremlin's hostility to human rights and to the United States itself.

On a Friday afternoon in clear daylight, masked men grabbed Mr. Razvozzhayev and shoved him into a black van outside the office of a lawyer who was preparing his asylum application on behalf of the United Nations High Commissioner for Refugees. The van sped away. Mr. Razvozzhayev’s personal belongings were left behind. More than the prosecution of the punk band Pussy Riot or the criminal inquiries into numerous opposition figures, the abduction of Mr. Razvozzhayev has showcased the Kremlin’s willingness to employ aggressive — even illegal — measures to suppress the political critics of President Vladimir V. Putin.

It also fits a pattern of recent cases in which people seeking protection in Ukraine were instead returned to the countries they fled, in violation of Ukrainian law as well as international laws and treaties that protect asylum seekers.

… “We see a problem of disrespect for international law on the part of Ukraine,” said Maksim Butkevych, a rights advocate with Social Action Center in Kiev.

… “If any government was complicit in the abduction of Leonid Razvozzhayev, that government committed a grave violation of Mr. Razvozzhayev’s right under the 1951 Refugee Convention to be protected from involuntary return,” said Mark Hetfield, the interim president of the Hebrew Immigrant Aid Society, a nonprofit group whose lawyers in Ukraine were preparing Mr. Razvozzhayev’s asylum application.


After Mr. Razvozzhayev resurfaced two days later outside a Moscow courthouse in Russian custody, Vladimir Markin, the spokesman for Russia’s top federal investigator, insisted that he had “turned himself in” — an assertion flatly contradicted by interviews with Mr. Razvozzhayev’s wife, lawyers and associates who saw him in Kiev. While Russia could have requested his extradition legally, international rights monitors say Ukraine routinely flouts normal procedures.

… Mr. Butkevych said that kidnappings were rare but that asylum seekers were routinely deported or extradited from Ukraine in violation of their rights. “In general terms, Ukraine is not a safe country,” Mr. Butkevych said. “For some people, especially those people who are actually wanted by their countries of origin, it can be dangerous.”

That certainly proved true for Mr. Razvozzhayev, a former amateur boxer and native of Siberia who has long been a close associate of Sergei Udaltsov, the leader of the Left Front, a radical socialist group that is at the core of the Russian political opposition.

Mr. Razvozzhayev’s lawyers say that after he was abducted, he was driven across the Russian border, held for nearly two days in the basement of a house, denied food and subjected to what has been described as psychological torture, including death threats against his family.

They said he was also forced to write and sign a 10-page confession, admitting to allegations first raised in early October in a documentary on NTV, a government-controlled television channel. The film showed Mr. Udaltsov, Mr. Razvozzhayev and others, in what was said to be a meeting in Minsk, in Belarus, appealing for financial assistance from a political operative from Georgia, the former Soviet republic.