Plantu comments on Gérard Depardieu's Decision to Flee France and Its 75% Supertax for a (Relative) Fiscal Paradise 1 KM From the French Border. 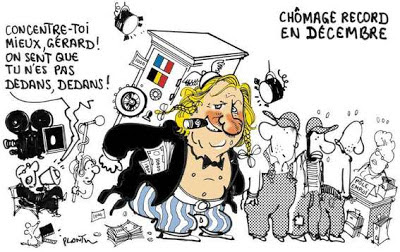 In Plantu's Le Monde cartoon, we see a cigar-chomping movie star in his recurring role as the Gaul Obélix carrying his safe with the French and Belgian flags (in the same manner that the Astérix series character carries his favorite menhir standing stone around behind his back) during a period of "record unemployment in December" while a film director shouts:

• Concentrate some more, Gérard. One can tell that you are not feeling involved! 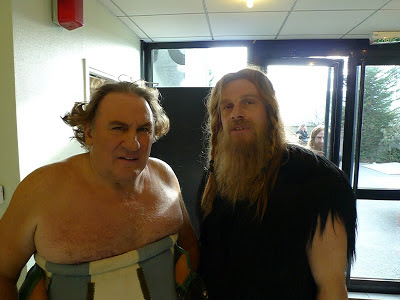 Gérard Depardieu as Obelix without the Gaul's moustache in the company of an extra playing a viking (1:20) during the filming of Astérix et Obélix: Au service de sa Majesté (check out the parody of "300" (barely 1 second in the trailer))

Update: Asking a socialist to embrace austerity is like asking a prostitute to embrace chastity