"It's the Middle Ages" Inside a Prison Filled with Rats, Refuse, and Rainwater, Denounces an Inmate; An American Jail? No, a French One 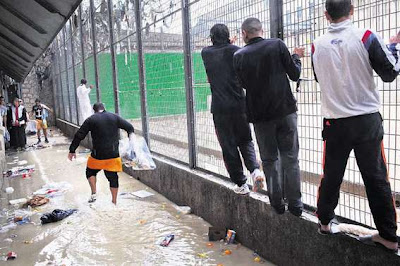 The team of the Controller General of Prisons left the premises unnerved. By the dreadful smell of garbage and urine, by the crumbling walls, by water trickling inside buildings, by rats that swarm to such a point that guards stamp their feet during night patrols to scare them off. They found a scorpion in a puddle and came upon a prisoner lapping water from the toilet, tired of three weeks' worth of ignored requests to repair his cell's faucet. Another inmate, petrified by fear, ended by admitting that he was the slave, including in the sexual sense, of his two fellow prisoners.

people who are totally reactionary and have not the slightest idea of what human rights entails — Franck Johannès publishes an article on the front page of Le Monde on Marseille's prison of shame (see the slide show as well as the video).

The "overpopulation of detainment places" is a thing which the daily of reference describes as nothing less than a French disease, while National Syndicate of Prison Directors (SNDP) leader Boris Targe warns that the "situation in [French] prisons has become truly alarming" as he deplores "an explosion of violence between prisoners and against the prison personnel." (Read the original French version.)

Jean-Marie Delarue, the Comptroller General of Places of Liberty Deprivation [yeah, how more bureaucratese can you get than that?!], found the shipwreck of Marseille's Baumettes prison sufficiently alarming to ring the emergency bell provided for in case of the "serious violation of fundamental rights."

… The treatment of waste "is problematic," notes the report politely, and the electric grid "does not fill current needs": one guard made ​​his night rounds, in full darkness, with nothing but his own tiny personal flashlight. Seven showers in ten are broken. The kitchen was indeed renovated in 1998, "but the hallways of the basement where it is located are extremely dirty." When inmates have not been brought back from their promenade, their meal trays are left in front of the cell doors, to the great satisfaction of the rat population used to waiting for feeding time. Most trays end out the window. "It's a miracle that there has been no epidemic," exclaims the Comptroller, "if an inmate were to become seriously ill, it would spread like wildfire." 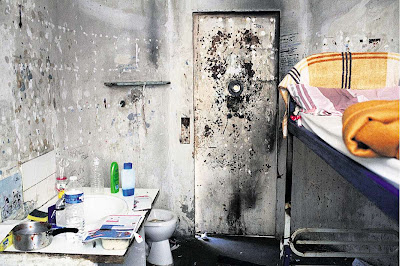 … These detention centers are bursting at the seams with an overpopulation averaging 136.6%.

CLERKS AND JUDGES REFUSE TO SHOW UP

There is a scarcity in personnel, and given the conditions of work, absenteeism is high: 2.6 days' worth of absence per person per month, according to the Comptroller's calculations. One of the guards remembers the day when a rat jumped on his chest, something that duly traumatized him. Sometimes there is only one warden per floor, which amounts to 200 prisoners. Judges' clerks responsible for sentencing refuse to show up at the jail — consequently, the judges themselves do not go there either, something the psychiatric MDs refuse as well.

There is, moreover, strictly nothing to do inside les Baumettes. ... "In these circumstances," says Jean-Marie Delarue, "the only activity there is is the promenade, for up to six hours per day."

Guards do not supervise the walk — "because they're afraid" — or, indeed, the showers, where bloody scores are settled. Since the beginning of the year, doctors have identified 14 multiple bruises, eight deep wounds, seven fractures, three head traumas, and one rape. Because inside a prison, everything has a price. Like a telephone. "I have two phone providers," said one officer. "The retailer and the thugs." 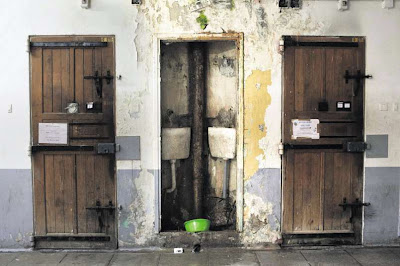 … The poorest, or the weakest, go into debt (15% on average are indigent), many no longer dare leave their cells, even to take a shower. Others go into the service of thugs — or try to escape.

Prisoners testify to Simon Piel that "Les Baumettes is a dungeon" and that inside, "it's the Middle Ages":


The nine months one inmate spent in les Baumettes, the Marseille detention center which he was released from in 2006, left permanent scars. "Some of the others tried extortion to get my shoes or pants, but I had become friends with some hefty dudes. And then I did the warrior spiel. When guys know that if they want to assault you, they will have to fight, they pause to reflect. If you allow it to happen only once it is finished." The staircases, the showers, and the walking areas are the places that are most feared. "Never make a move by yourself," he says. "There are no cameras or guards in that kind of area. When I was inside, one guy got stabbed three times in the stairwell. To be alone is to be a target."

… In addition to this daily violence and the difficulty for a staff suffering shortages to manage it, there is a dilapidation which spares not a single building. "This is the Middle Ages," says a former inmate. "The rats are the size of a big cat," testifies another … He says: "My cell was foul with regards to hygiene: the toilets were appalling, the mattress and blanket were filled with hair." As for cockroaches, he identified "three different types."

Referring to "the indignity of the situation" and to what it calls a "national scandal", a Le Monde editorial concluded that "France is regressing and is treating its prisoners in an inhumane fashion."


Camus said it best: "The only way we can judge the degree of civilization in a nation is by visiting its prisons." A visit to les Baumettes prison in Marseille shows that France is regressing and is treating its prisoners in an inhumane fashion.

On Thursday, December 6, Jean-Marie Delarue, Comptroller General of Places of Liberty Deprivation, took stock of the alarming state of this particular prison: the rats and cockroaches are swarming, the cells with broken windows are repulsively filthy, inmates lacking running water drink from the toilet bowl. The prison is overcrowded, the inactivity forced, the settling of scores and the racketeering pervasive. In fact, the deprivation of liberty is no longer makes any sense, because it produces madmen more violent on the way out than on the way in.