There Is "An Impression of Generalized Disorganization" in the French Army, Says Paris Report on Savings in the Armed Forces

There is "an impression of generalized disorganization" in the French Army, writes Le Monde on its front page, quoting a Senate report for the reform of the armed services.

The problem is not the quality of the fighting soldier, but the politicians who have tried to make saving by instituting reforms throughout the service, with Nathalie Guibert giving a handful of examples of ludicrous changes.

For the Army, it [the reform] was a cultural shock, because it marked the end of the age-old rule, "one commander, one mission, and lots of means." 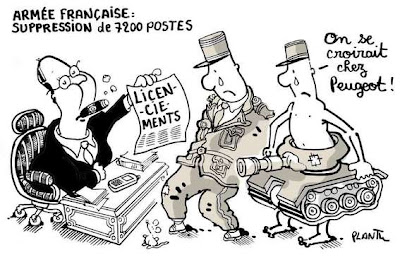 • You'd think we were at the Peugeot automaker!
Posted by Erik at 12:42