"More taxes, not less spending, is their underlying creed": The patent nonsense of Europe’s most unreconstructed Socialist Party

comments Charlemagne as The Economist analyzes those whom it calls "the dinosaurs". 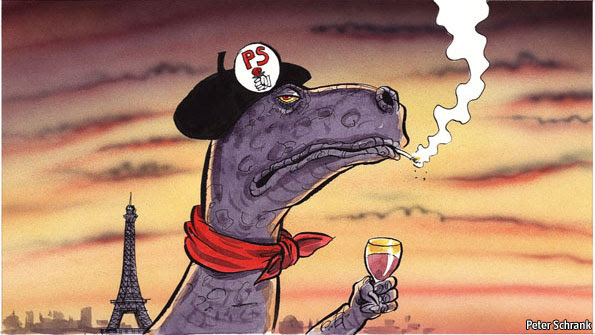 The oddity is that almost everywhere the European left is in decline. Among the large countries, Socialist parties rule only in Spain, where they look likely to lose November’s election. The only big place where the left has a good chance of returning to power is France, at next spring’s presidential election. Yet France’s Socialist Party also stands out as Europe’s most unreconstructed. Hence the contorted spectacle of a party preparing for power at a time when the markets are challenging its every orthodoxy.

… Next to such patent nonsense [i.e., the French Socialist thinking of an “anarchic globalisation”-denouncing Ségolène Royal or of a “deglobalisation”-promoting Arnaud Montebourg], promises by the two front-running candidates, Martine Aubry and François Hollande, seem merely frozen in time, circa 1981. They want to return to retirement at the age of 60 (it has just been raised to 62), and to invent 300,000 public-sector youth jobs. Each supports Mr Sarkozy’s deficit-reduction targets, but refuses to approve his plan to write a deficit rule into the constitution. More taxes, not less spending, is their underlying creed.

The party is not out of tune with public opinion. The French are almost uniquely hostile to the capitalist system that has made them one of the world’s richest people. …

The causes of French left-wingery are various, but a potent one is the lingering hold of Marxist thinking. Post-war politics on the left was for decades dominated by the Communist Party, which regularly scooped up a quarter of the votes. In the 1950s many intellectuals, including Jean-Paul Sartre, clung to pro-Soviet idealism even after the evils of Stalinism emerged. Others toyed with Trotskyism well into the 1970s. François Mitterrand, who mentored Ms Royal, Ms Aubry and Mr Hollande, was swept to the presidency in 1981 by offering a socialist Utopia as a third way between “the capitalist society which enslaves people” and the “communist society which stifles them”. …

Please allow us a moment of madness

All this requires heroic faith among centrists considering voting Socialist that reason will triumph over fiscal folly. Moreover, experience suggests that the Socialists, if elected, may feel compelled to introduce some signature policy as a sop to their disappointed base. Under Mitterrand, it was the wealth tax. Under Mr Jospin, it was Ms Aubry’s 35-hour working week. With France’s recovery fragile, the prospect of more such lunacy is chilling.