Remember waaaay back, right after the paper bag hysteria based on the idea that the world would run out of trees, and that paper bags were by-some-miracle linked to the loss of old-growth forests (when we were supposed to start using PLASTIC bags)... there was this impending apocalypse called the hole in the ozone layer. Apparently, it hasn’t changed much at all in 20 years, despite eliminating spray deodorant and going through the costly effort of changing the refrigerant used in, say, everything. 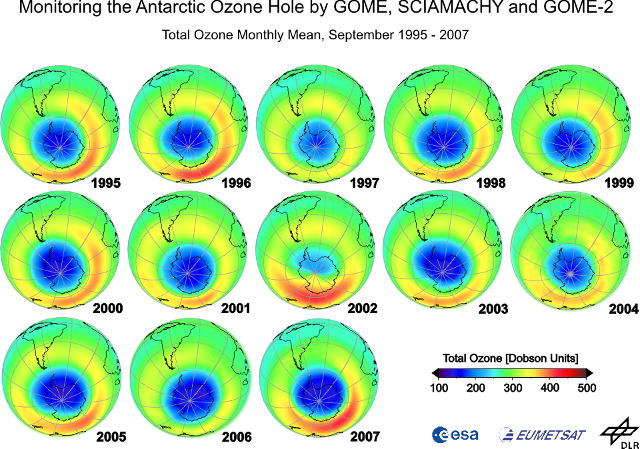 John Ray links to one rather telling quotation that a few bitter clingers in the cult of ecological millennial madness can’t quite square: the fact that the Ozone layer Jihad really was as much of a big fat pile of mendacity that “the deniers” said it was. Even the author of the Gaia theory, James Lovelock, reacted the way any as-yet unprogrammed person would with the 2009 leaking of the Climategate emails.

“I was utterly disgusted. My second thought was that it was inevitable. It was bound to happen. Science, not so very long ago, pre-1960s, was largely vocational. Back when I was young, I didn’t want to do anything else other than be a scientist. They’re not like that nowadays. They don’t give a damn. They go to these massive, mass-produced universities and churn them out. They say: “Science is a good career. You can get a job for life doing government work.” That’s no way to do science. I have seen this happen before, of course. We should have been warned by the CFC/ozone affair because the corruption of science in that was so bad that something like 80% of the measurements being made during that time were either faked, or incompetently done.

It’s really just their followers that are coo-coo for Cocoa Puffs. Aside from the flunkies and dupes, the true proponents are just proving themselves to be evil.

“The warmers are getting more and more like those traditional predictors of the end of the world who, when the event fails to happen on the due date, announce an error in their calculations and a new date.”

Otherwise, top of the icecap to you, friends. May your endless wait for the violent, dramatic, and sudden sea level rise be as uneventful and contrived as every other feature of your lives.