Continuing to Miss the Point

The Guardian, AKA the media mouthpiece of al Queda’s cheering section, mapped every casualty found in the mass of field reports stolen by Wikileaks. One of the usual masturbatory comments went:

This data should be looked at in every classroom in America.

I suppose they like the idea that children should be programmed using operant conditioning into doing their political work for them, but that aside, the commentator, Roger Blank is almost right.

It should be shown to every autocrat in the world who abuses their people – as in “this could happen to you.”

That aside, the morons promoting the potentially lethal release of informants’ and citizens’ identities in the Wikileaks war on democratic societies (that aids and abets the enemies of human rights) are no different than anyone else who constructs delusional, self-aggrandizing notions of who they are. Take for example this factually inverted political cartoon from the Guardian: 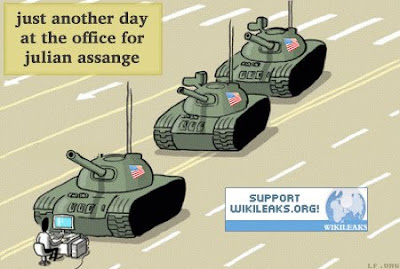 The US military using force against the imaginary “martyr,” Julian Assange? Grow up! Assange should be shown driving the armor on behalf of the world’s mass-murdering tin-pot strogmen.
Posted by Joe at 09:24