“The administration is doing more talking than listening, and several of us are already worried we’ve been suckered into a PR exercise.”

laments The Economist — as the weekly editorializes that Barack Obama "has gained a reputation for being hostile to business" (not that the Demonizer-in-Chief simply is hostile to business), again suggesting that America's problem with Barack Obama is, at least, to a great extent, clueless, brainless, and/or myopic members of the public —

and the absence of anyone with a business background in Mr Obama’s inner circle is invariably mentioned as a reason why. The perception in corporate America that the president is actively anti-business, or at the very least doesn’t “get it”, has started to “have a psychological effect on how firms invest”, notes one well-informed insider, who used to see this as a “seven out of ten problem” but now rates it as a ten.

a telecoms giant, used a recent speech in Washington, DC, to accuse the president of creating an “increasingly hostile environment for investment and job creation”, claiming that the administration’s regulatory expansion into “every sector of economic life” is making it “harder to raise capital and create new businesses.” Jeff Immelt, the boss of GE, has said that the administration is not in sync with entrepreneurs. The US Chamber of Commerce, a business lobby, has complained that the Obama administration has “vilified industries”.

After duly using Barack Obama's favorite meme — blaming the situation on his predecessor — and suggesting that "it would be tempting to conclude that Mr Obama’s business critics protest too much", the evermore-turned-to-the-left Economist finally admits that

the bosses do have a point; it is hard to imagine that a president who really understood the depth of America’s economic problems would have pushed ahead with such a huge, disruptive reform at that particular moment.

…as a person with first-hand experience of Mr Obama’s decision-making points out, the “atmospherics really do matter”. The mere perception that the administration is anti-business 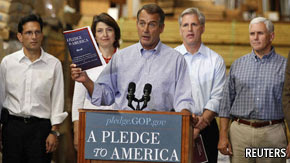 is “starting to make the bosses of Fortune 500 companies more risk-averse,” says a billionaire who used to run one of America’s leading internet firms. Another valid criticism is the absence of any former business executive in the cabinet, meaning that there is no “go to” person for corporate America. “Surely he could have given us commerce secretary. Who has even heard of the current guy?”, wails one veteran boss. (The current commerce secretary, by the way, is Gary Locke, a professional Democratic politician and former governor.)

…After all, notes the veteran, just like his boss they have “never had to make payroll”.

…As for Mr Obama, when he meets businesspeople at fund-raisers and the like, he too often shakes hands and moves on, leaving them feeling he was more interested in a photo-op than a conversation. He caused offence and disbelief a while back by turning up for a meeting with a group of prominent chief executives and then reading to them from a teleprompter.

…a cabinet member [who had run a big firm] would have been a particularly valuable counterweight to the influential but rather ivory-tower academics in the current White House. … It looks as though the time has come for Mr Obama to stop attacking the fat cats of business and try stroking them instead.

It is depressing to note that most of the the comments to the articles and the editorial are slated to the left (although that seems to prove the contention that the magazine is equally so), but one reader's reaction stands out:

Obama's idea of a "mixed capitalist economy", as the article puts it, is to take enormous election campaign donations from big business and Wall Street, then once in power hit them with punative policies to pay for his administration's profligate spending. He is a typical liberal hypocrite.

In an editorial, The Economist shows why the leftist media gets it all wrong:

The president has gained a reputation for being hostile to business. He needs to change it

Obama seems anti-business because he is. This is not just a PR problem. Every policy is designed to drain the private sector of resources and free choice, add burdens to successful people and businesses, subsidize the politically connected, and make as many people as dependent on government as possible. This is intentional in order to "fundamentally transform America" into a sclerotic social welfare state that is poorer, less free, more accommodative to tyrannical regimes, and less reliable to traditional democratic allies. In 20 months, BHO has made giant strides toward this objective. It will take many years to reverse the damage, if we ever can.