In fact the further back “the crime against humanity” is in the loon-induced mist, the better. But look at this in basic terms. 9-11 takes place. These idiots, employing the same weak logic that they always have in their overraught and fiction-laden way over the past four decades, want to blame the victims, and the majority of “wizened” folk in this “wizened” land just nod along with them.

Other than among associates of Feisal Abdul Rauf, one could well believe that 9/11 “trutherism” is largely a thing of the past. The main target of the “9/11 truth movement” was always, after all, the supposedly nefarious cabal otherwise known as the Bush administration. With the end of President Bush’s second term, the “movement” had lost its very raison d’être.

In the meanwhile, the vast majority of Americans have other fish to fry. But photographs from a rally that took place in Berlin on the anniversary of 9/11 suggest that 9/11 “trutherism” is alive and well in Germany.

These people are not allies – not of the US, nor to the humanity that they pretend to have a monopoly on the sympathy people have for them.

“Regime change” in the United States appears not to have sated the hunger for “9/11 truth” in Germany. As documented on the German Gnurpsnewoel blog, “truthers” were out in force earlier this month at the “Freedom Not Fear” demonstration that took place on Saturday, September 11, in Berlin.

They have forfeited (for the last time,) any “sure I’ll play along for history’s sake” respect that anyone could possibly have for them. Looking for a “class enemy” fit to rally the proletarian mass? Well, here they are:

The reference is to the February 1933 Reichstag fire, which was famously exploited by the Nazi regime to consolidate its power and persecute its political opponents. It has frequently been suggested that the Nazis themselves were responsible for setting the fire. The “9/11 = the Reichstag fire” equation has long been a preferred trope of Germany’s homegrown brand of “trutherism” – or what might better be called, in light of historical precedents, “9/11 revisionism.”

There is a certain irony in the fact that such 9/11 revisionism would abound at Berlin’s “Freedom Not Fear” demonstration. As German-language publicity materials make clear, the principal practical objective of the sponsoring organizations is to combat so-called data-retention laws. In March, Germany’s Constitutional Court overturned a German law implementing minimum data retention requirements laid out in a 2006 European Union directive.

So if its’ any sort of salve, the reason they persistently find new and rotating ways over the decades to hate American and the United States, is because it’s an easier, more passive-aggressive way to hate their fellow Germans.

What is it REALLY all about anyway? The same as it always is. This year’s pretext just has to be a juicy enough lie to keep the kids marching: the idea that everyone not like them, their “class”, their “tribe”, etc., permanently has blood on their hands. And somehow, despite the regimes they love to defend, they don’t.

Without irony, the march started at what was once a divided zone, part of which was the “death strip” of a regime that never seem to understand is had the same ideology as the one most of them promote.

Starting at Potzdamer Platz, any direction you would then go in would run you into a former line in the boundary where people seeking “Freedom from Fear” were shot on sight by fellow anti-capitalists who pretended to have a monopoly on human decency – whose enemy was a faceless mythical super-beast with stars and stripes on their flag, and a flunky German federal state to do its’ bidding.

Nothing has changes. They are simply to intellectually narrow to see events as events, and not a burning bush confirming their theories and world view. They are incapable of dealing with any of the randomness and complexity of the real world.

In fact, I think that the stale repetition of the whole thing actually provides comfort, much in the way that children crave continuity. 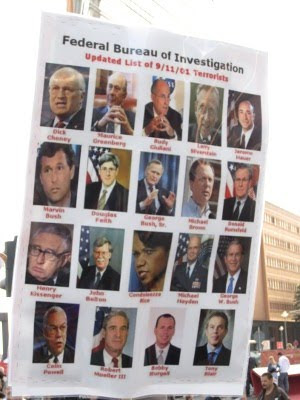 By the way, DW-Radio last week, actually reported this event on air. However, they called it a “data privacy” rally, with the gist of the story being that “gee, people just don’t come out for these things like they used to.” The pedantic, old fashioned antikapitalismus, “Black Bloc”, anti-Polizei crap, nor were the terrorist-supporting themes mentioned. In fact the thrust of their complaint is that German ISPs log data, but somehow, by some secrete international magic, it’s all because “9-11 was an inside job”.

Demonstrators also criticized electronic cards for health insurance and the SWIFT agreement, which gives the United States access to bank transaction details in the EU to carry out counterterrorism operations.

Never mind anything else they also, in large margin, said.

Decades ago, I first saw this logic operate in exactly the same manner. It remains as vacuously and morally inverted as ever, as strange as people going on hunger strikes for the release of the Baader-Meinhof gang. Them being "the victims", and all.
Posted by Joe at 14:26