Finally: An Entirely Valid Reason to Go on Strike

From Denmark: an entirely valid reason to go on strike (tak — hik — til Valerie)… 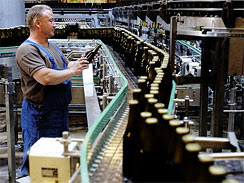 The warehouse and production workers in Denmark are rebelling against the company's new alcohol policy, which allows them to drink beer only during lunch hours in the canteen. Previously, they could help themselves to beer throughout the day, from coolers placed around the work sites.