So How Are We Supposed to Remember What Happened in 1950? China "Took Over" Tibet! 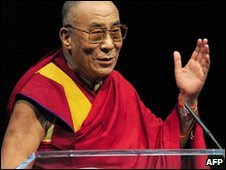 "China, which took over Tibet in 1950", writes the BBC in a story about Obama's upcoming meeting with the Dalai Lama. It sounds almost like Beijing's invasion, occupation, and subjugation was the result of a mutual agreement or, at worst, nothing more ominous than a hostile… takeover in business transactions.

Nothing as bad — naturally — as what happened, say, in Iraq under Bush (and Blair)'s "catastrophic" invasion and "disastrous" war…
Posted by Erik at 10:54