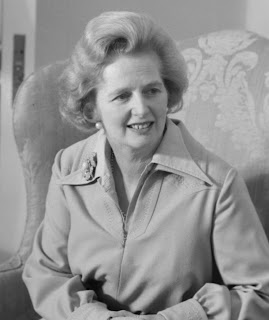 A few days ago the Guardian mused editorially:

Is austerity all you have to offer, Mr Cameron?

Today the Bank of England governor answered the Guardian's query:

The government should not unveil any further fiscal stimulus in April's budget as Britain's public finances are already in such dire straits, Mervyn King warned today.

Appearing before the Treasury select committee, the Bank of England governor said: "Given how big those deficits are, I think it would be sensible to be cautious about going further in using discretionary measures to expand the size of those deficits."

"There is no doubt that we are facing very large fiscal deficits over the next two to three years," he added.

While proven long ago to anyone with a modicum of sense and ration, the Great Lady's claim has now been delivered in spades:

They've got the usual Socialist disease—they've run out of other people's money.

No doubt the usual fevered minds will continue running barefoot through the bogs chasing that elusive rainbow which promises more taxes, more government and less freedom for the individual. If only they can get a few more precious drops out of the turnip all will be right with the world..... Of course, it's never enough.

It really is way past high time to treat the bankrupt "ideas" of socialism and governmentalism with the absolute and utter contempt so richly deserved and earned.
Posted by Georges at 00:33