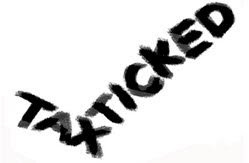 Those keeping abreast of issues will no doubt be already aware of the Guardian's fortnight series regarding the "tax gap" facing the UK. This "tax gap" is defined as businesses and corporations having the audacity to use legally defined and approved deductions, allowances and exemptions to minimise their tax bills.

Those aware will also know that the Guardian's parent company has made generous use of the very same tax "avoidance" legalities to reduce their very own tax bills. Naturally the Guardian's use of these legally defined and approved deductions, allowances and exemptions to minimise their own tax bill is perfectly normal and innocent by their own reckoning. Other businesses and corporations using the very same are painted as tax schemers/avoiders/evaders/etc. The same old lefty story, do as we say - not as we do.

Which brings us to one of NP's favourite hard-left hand-wringing pressure group of do-gooders, Tax Research UK (TR-UK). Today, TR-UK gets all touchy-feely-emotive about a new campaign:

A speculative idea that would enable the man in the street to support companies that don’t use tax avoidance schemes, by choosing to buy products displaying a "TaxTicked" logo.

I've no idea if it will work.

But right now I'm sure there are a lot of people who really do dislike those who abuse our tax system.

It would of course help if our government stopped using them. People like our major banks and all the large firms of accountants plus all the major lawyers would fail immediately.

Wouldn't it be good if the government made compliance with this process a condition for securing state contracts?

Now, TR-UK is often cited in the Guardian and one of its members (only member?), Richard Murphy, often contributes various "bigger government is good, more taxes are needed" type of screeds to Comment is Free. Since the Guardian is a proven participant (positively so) in the so-called "tax gap" by using offshore vehicles to facilitate business transactions, one can only deduce that TR-UK is calling for people not to buy the Guardian and for the British government to withdraw their very lucrative placement of governmental classifieds in the Guardian.

There you have it, Guardian contributor calls for the people to stop buying the paper and the UK government to stop contracting with the paper as well. One rubber crutch award to the emotive non-thinkers at TR-UK, no doubt a serial future awardee as well.
Posted by Georges at 14:00