While minimizing this news item, The Guardian had to stress:

Another survivor, Zurmina Bibi, said around 10 people, including three or four children, had been killed in her home. "There were dead people everywhere," she said. 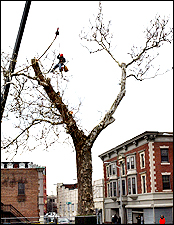 Atta Mohammad, an elderly man who accompanied a group of wounded civilians to the hospital, told Reuters he believed up to 35 civilians had been killed and more than 40 wounded.

Oddly enough, every other outlet reported 16 civilian and 80 Taliban combatant casualties after citing civilian reports that jived more closely with that of the Afghan government, but hey, that’s not stopping the Graun from not mentioning an inconvenient truth about this shaggy shrub:

[Captured,] Mollah Dadullah, who is reported to be one of the leaders of the Taliban in Afghanistan, was captured in Kandahar.

Almost 190 Taliban members have been killed in operations lasting since Wednesday [17-May] in Afghanistan.

It seems they also can’t quite identify a cabal when they see one either.The fuse is lit!
Posted by Joe at 17:06