No American citizen should stoop to apologize for being American; doing so is nothing short of despicable

"…some people just fly off the handle without even talking to me — it's as if they had been waiting to run into an American all day to let their feelings out," [sighs Christian Cox].

Only a couple of days after my post on European racism (the worst of which is that directed against Americans), the BBC reports on American expatriates in London reflecting on how anti-Americanism "feels like racism" (cheers to Chakman). 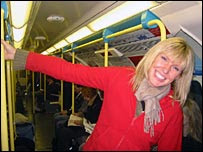 To avoid confrontations she says she lowers her voice on the Underground and in pubs. [Either "Christian" is a typo and her name is actually Christina or her parents decided to give Ms Cox an original first name.]


But in one incident an older man asked her directly if she was American.


"When I said yes he said: 'I just want you to know that I think you are the poorest people I have ever met in my life' — meaning we were low-life.


"I said I was sorry he felt that way, but that I disagreed."


The man started shouting obscenities at her group. The row developed into a brawl and Ms Cox suffered a black eye as she tried to pull two people apart.

The BBC report goes on to quote Americans who apologize or who pretend to be Canadian, including quite a number in the comments section (for instance this lady who proudly states that 'I usually defuse the situation by saying "Yes, I'm an American — and I'd like to apologise"'). To which I wrote the following comment (minus the hyperlinks, of course), based on the recent post in question as well as on my December letter in the IHT (so far, the comment seems to have been ignored):

No American citizen should stoop to apologize for being American, nor should they even think of apologizing for the current administration (no matter what he or she thinks of Bush) — doing so is nothing short of despicable, especially when the Yankee-haters are guilty of the ugliest of double standards.


As the eminent British historian Paul Johnson has said, "The truth is, any accusation that comes to hand is used without scruple by the Old World intelligentsia. Anti-Americanism is factually absurd, contradictory, racist, crude, childish, self-defeating and, at bottom, nonsensical."


Various commenters claim that anti-Americanism is at best non-existent and at worst exaggerrated, referring to the tired old canard that "it is only America's leaders (or policies) they are against". Really? Is that so?

As the creator of the Americans Anonymous association [which I invite Ms Cox and Francesca Terry to join, by the way] and the author of a book on the subject, I would like to be told, how often have the Europeans commented on the disdain they have for, say, the leaders and/or administrations of Russia, China, Cuba, Zimbabwe, Iran, and (Saddam's) Iraq, and that with the same vehemence they reserve for Uncle Sam? (And how often have Europeans subjected Chinese, Cuban, or Zimbabwean expatriates to the same level of scorn -- or even to statements of disagreement -- for the actions of their truly despotic governments, and how many Iraqi travelers did they take on during the reign of the mass killer Saddam Hussein?)


How often have the Europeans held mass demonstrations against the fighting in Chechnya, the conflict between Ethiopie and Eritrea, and the Iran-Iraq war?


How often have they held vigils against the death penalty in China, in Saudi Arabia, in Sudan, or in Japan (yes, even another democracy) and when did they ever express "concern" over how prisoners in those countries were treated?


Those Frenchmen who stated proudly "Chirac had the balls to stand up to Bush", how did they react when their president said that France would not mention human rights during a visit to the Kremlin because it was necessary "to show consideration for Russian sensibilities"?


How did those humanists react when Paris lit the Eiffel Tower in red for the visit of the Chinese president, when the government banned Nobel laureate Gao Xingjian from attending the Paris Book Fair, or when Chirac, along with fellow peace-lover Gerhard Schröder, tried to resume selling weapons to the saber-rattlers of Beijing?


There was not much of a reaction, was there?


The truth is, the Europeans didn't (and don't) care. They didn't care one way or the other for one simple reason: they were issues in which Uncle Sam was not involved.


Anti-Americanism is quite alive: it is the practice, on a regular basis, of double standards. Nothing more. And nothing less.

An alternative answer Ms Cox might have given to the older man (the one who snorted that 'I just want you to know that I think you are the poorest people I have ever met in my life'), as per AA's (fascetious) guidelines:

(Then again, that might have earned Ms Cox two black eyes!)
Posted by Erik at 09:49