In an (unlinked) article in Le Monde 2, Pierre Assouline describes the books read by George W Bush. Besides the obligatory mocking commentary ("one would be wrong to laugh"), Pierre Assouline goes on to shield (relatively speaking) Mao Zedong from a biography.

That big black book, as little nuanced as the Little Red Book, is an indictment by Jung Chang and Jon Halliday. Mao is presented as a comic book-type monster, tyrant put into power by Stalin, whose tally of kills (70 million dead in peacetime) places him ahead of Stalin and Hitler in the records of dictatorships.

Sandalista's review serves as a reply to nuancists like Assouline:

Mao, to nuanced intellectuals, was a mitigated monster, an agrarian reformer and social engineer making omelettes and breaking a few (c.70,000,000) eggs. Mao was a liberal in a hurry. In his rush to utopia, mistakes were sometimes made.


Mr. Kristof and the New York Times are entitled to their own nuances, but let's pray (Bush, according to the Times, does that too) their nuances don't extend to national socialism's utopia. Would Kristof and Times intellectuals cut slack for Hitler because no document directly implicates him in c.7,000,000 murders?

I am all for biographies that show the good and the bad sides of people. Look at Manchesters incredible biography of MacArthur. But I do not like books that are so politically correct that they won't glorify those that should be glorfied and they won't villify those that need to be villified. The authors clearly show what Mao really was. 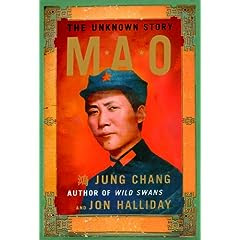 Some critics of the book say it is a hatchet job because it ignores all the "good" he did during his rule. Even if this is true, and that's a big if, that doesn't make him any less of a butcher. I can point to the recovery of the German economy between 1933 and 1938 under Hitler. Franco expelled the Soviet presence in Spain and saved 60,000 Jews from the Nazi death camps. Suharto brought political stability and economic growth to Indonesia. And Pinochet relinquished power and left Chile a prosperous, thriving, free market democracy. You can meticulously examine any dictator's record and probably find something positive to write about (although Pol Pot's would be rather difficult). And isn't Taiwan, ruled for decades by brutal Nationalist leader Chiang Kai-shek (whose murders were a drop in the ocean compared with Mao's), better off today than China, considering it is a free-market democracy? So why does Mao, who spilled more blood than all the aforementioned tyrants put together, deserve special treatment? Why all this ambivalence towards a man who starved and slaughtered scores of millions of his own people without giving it a second thought? Keep in mind his warped interpretation of Marxism (Maoism) inspired terrorist movements such as the Shining Path of Peru, who have killed tens of thousands of people in car bombings, assassinations and peasant massacres. Some 12,000 have been killed in the Maoist insurgency in Nepal, including 38 slaughtered in a bus bombing by the Maoist thugs several months ago. And Cambodia's Pol Pot was a Maoist inspired killer. Other than inciting bloodshed in a few places, Maoism internationally has fallen flat on its face.


If you asked me, it's about time someone threw the book at this vicious dictator and murderer, his twisted ideology, his blood-soaked legacy and the blind "useful idiots" who continue to adore him as some great humanist. Hats off to Chang and Halliday for this horrifying but absolutely necessary look at pure evil.