Le Monde's Yves Eudes has chosen excerpts from soldier blogs in Iraq. Needless to say, he starts out by confusing a combat zone with a matter of censorship, regretting that one can hardly find "authentic" soldier blogs anymore.

"Authentic", for the newspaper of reference, means blogs filled with cynicism, hand-wringing complaints, and the blame game in regards to the brass and America's leaders, along with suggestions that Washington's foreign policy without consultations with its allies (well-meaning, detached, and nuanced allies such as France and Russia) has done nothing but bring grief, chaos, and "la merde".


Meanwhile, Patrice Claude tells us of the travails of surviving in the Iraqi capital.

In Baghdad, today, noone no longer trusts anybody. Distrust is at the same level as the lack of security. Generalized. … Staying alive in the growing chaos in Baghdad has become the obsession.

In Baghdad, today, it's the strongest and the best armed who sets down the law

Oh, the good old pre-chaos days, when trust reigned and the strongest and the best-armed did not set down the law.


Oh, the good old pre-chaos days, when (as Doreen Carvajal and Andrew Kramer put it) 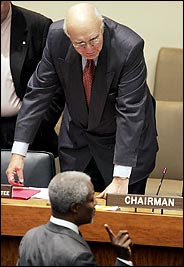 the Iraqi government developed a policy of favoring France, as well as Russia; it considered France a "friend" for opposing the United Nations' sanctions against Iraq. Other companies from different countries tried to reposition themselves with French connections and the help of well-placed people.


The report focused on Jean-Bernard Mérimée, a former French ambassador to the UN who, investigators allege, received $165,725 in commissions for oil allocations awarded by the Iraqi regime. He is already under investigation by French authorities, who are examining the roles of 11 other people. Their names also surfaced in the report and included Charles Pasqua, an ex-French interior minister, and his former aide, Bernard Guillet.

"While serving as a special adviser to the secretary general of the UN, with the rank of under secretary general, Jean-Bernard Mérimée began receiving oil allocations that would ultimately total approximately six million barrels from the government of Iraq," the report said.


The findings cast a harsh spotlight on a circle of people who, investigators said, manipulated the system and gained favors from the Iraqi government for opposing sanctions [and for opposing Washington's foreign policy? (ed)].


Tariq Aziz, who at the time was Iraq's deputy prime minister, told investigators that beneficiaries received oil barrel allocations based on their level of opposition to the sanctions.…

The report also cited Banque Nationale de Paris, or B.N.P., for playing a double role in handling the oil-for-food escrow account, but not revealing knowledge about certain financial relationships that enabled the payment of illegal surcharges. B.N.P., however, issued a company statement that the illicit surcharges were detected only through the "enormous investigative efforts" of the Volcker committee and the C.I.A.. The bank called it "unjustified" to suggest that "alleged deficiencies in its screening of payments contributed to illicit surcharges."


In Russia, the outline of the system was already known, but the report provided new information tying Russian energy companies to cash payments to the Iraqi Embassy.


One-third of the oil exported from Iraq through the program ended up in the hands of Russian companies, the report said. Russia had argued for lifting the sanctions.


… But one of those accused, Gilles Munier, freely admits that he received oil grants, which he used to fund the activities of a French-Iraqi association in Paris that crusaded against sanctions.

"My conscience is clear," said Munier, who noted that French authorities had confiscated his passport to prevent his departure from the country. "I am paying for my support of the Iraqi people."