Piercing Pain in China: "Police use dictatorial measures on anyone who resists them. Ordinary people have no way to defend themselves"

For three days and three nights, the police wrenched Qin Yanhong's arms high above his back, jammed his knees into a sharp metal frame, and kicked his gut whenever he fell asleep 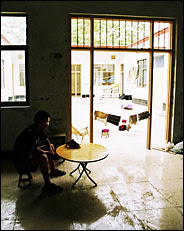 The pain was so intense that he watched sweat pour off his face and form puddles on the floor.

As a citizen of the world, aren't you happy that the international community has condemned America for the abuse perpetrated at Abu Ghraib, and that it kept condemning America for weeks, for months, (and probably) for years thereafter?

On the fourth day, he broke down. "What color were her pants?" they demanded. "Black," he gasped, and felt a whack on the back of his head. "Red," he cried, and got another punch. "Blue," he ventured. The beating stopped.

Aren't you satisfied that there exists a media that will not let America get away with the horrors that occur daily at Guantánamo, and that is determined to keep up relentless pressure on Washington?

This is how Mr. Qin, a 35-year-old steel mill worker in Henan Province in central China, recalled groping in the darkness of a interrogation room to deduce the "correct" details of a rape and murder, end his torture and give the police the confession they required to close a nettlesome case.

Aren't you happy the world springs to the defense of falsely-accused people in America's legal system?

On the strength of his coerced confession alone, prosecutors indicted Mr. Qin. A panel of judges then convicted him and sentenced him to death. He is alive today only because of a rare twist of fate that proved his innocence and forced the authorities to let him go, though not before a final push to have him executed anyway.

Aren't you happy that throughout the world — and in America itself — activists rave against America's unjust death penalty?

"Our public security system is the product of a dictatorship," Mr. Qin wrote his family when he was on death row. "Police use dictatorial measures on anyone who resists them. Ordinary people have no way to defend themselves."

Aren't you happy that throughout the world, there are innumerable committees formed to support death-row prisoners in American prisons and to bring them everything from moral comfort to legal aid? 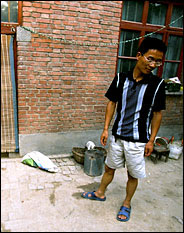 
The questioning quickly turned to torture. Mr. Qin said he was made to sit for many hours on the open metal frame of a chair without a back. His feet and arms were strapped to the chair legs and his body slumped through the frame, forcing the backs of his knees and his lower back against the sharp edges. The technique is known as "tiger stool."


Alternately, Mr. Qin's hands were handcuffed behind his back and cinched up until they were above his head and his arms felt as though they would separate from his shoulders. This was referred to as "taking a jet plane."


He described the pain as piercing. But he said he suffered even greater agony from lack of sleep. The police poured frigid water on his head and pounded him awake when he nodded off. They referred to this as "circling the pig." By his third day in detention, he said, he felt delirious.

One of the worst things in Jo Kahn's article (and in his media presentation) is how the injustices of a tyrannical one-party state are attributed almost to accident and to fate and to forces beyond their control, suggesting that good intentions were at hand ("struggling", "working hard", "arduous process", "Unfortunately", had only the officials been "sympathetic" all would have been well).

A slew of wrongful convictions in China's court system suggests that China is still struggling with some fundamental questions of jurisprudence … Over the past quarter century China has been working hard to create a credible legal system, but the process of creating a legal system has been pretty arduous, particularly in the area of criminal law … Unfortunately for Mr. Qin, the prosecutors and the judges were not any more sympathetic than the police … 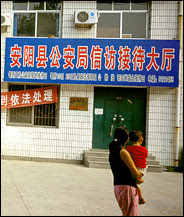 Notice also how the nation has been personalized ("China is still struggling", "China has been working hard"), which is not only simplistic, it is unfair and a product of double standards vis-à-vis… democracies (imagine letting Bush off the hook with sentences such as "America is still struggling" in Iraq, "the United States has been working hard" to help the victims of Hurricane Katrina). Moreover, it is evidence of laziness on the part of members of the MSM, as they are unwilling to look beyond the surface — in open democracies, they see controversies and hear opposing viewpoints, and report on that. In repressed societies, they see a placid surface and listen to government spokesmen. Then they tell us (and convince themselves) that they are doing the public a favor in their reporting…

What this all boils down to is that it does not seem to have occurred to a member of the MSM (or to his editors) that the reason for the abuse lies in the authoritarian system itself and that letting leaders of a dictatorship off the hook is the last thing you want to do. Indeed, this practice of double standards, in a nutshell, is what is the problem with the MSM.

More on the international community's brave fight against China's death penalty here…
Posted by Erik at 08:35