snorted UK food critic Egon Ronay as he accused the French president of being "ill-informed" for his attacks on British cuisine. 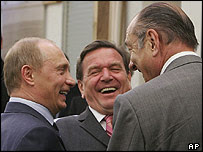 If you want to read more about typical French condescension (bile) towards countries that don't fall in line with the dictates of Paris, head to the following BBC report from Kaliningrad (thanks to Gregory), the one in which Jacques Chirac is quoted, as saying (to the laughs of the three main "peace camp" members), regarding the Brits,

"One cannot trust people whose cuisine is so bad"

Understand, now, that the obvious correlation is that people whose food is good — as good as that of the French, say (no controversy regarding la cuisine française, by the way, needless to say) — you can trust (hook, line, and sinker) and you should just fall in line with them, automatically, and follow them in whatever they do and say, no matter what the issue and no matter how close it is to or how removed it is from the subject of nutrition, and those who might be so bold as to voice other ideas on the matter "auraient mieux fait de se taire…"

"The only thing they have ever done for European agriculture is mad cow disease," Mr Chirac said… "After Finland, it is the country with the worst food."

Hans Valimaki, owner of Helsinki's prestigious restaurant Chez Dominique, recipient of two Michelin stars, hit back at the French. "It is also true that the French are the dirtiest people. They do not buy a lot of soap, and for that, our president will not insult them."


The daily Iltalehti called Mr. Chirac's comments absurd, and "in any case, even the French no longer take him seriously."