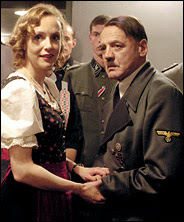 "For me as a historian, the Hitler subject is finished," said Lutz Hachmeister, a professor of media studies at the University of Dortmund and a documentary filmmaker. "Every aspect of Hitler has been shown."


That does not mean, he said, that the Third Reich should not be explored in films and other media. Mr. Hachmeister is completing a documentary about Goebbels, the sinister propaganda man whom he describes as the first media-age politician. In 2002, German television broadcast a somewhat leaden comedy, Goebbels and Geduldig, which portrayed Hitler's adviser and a Jewish concentration camp inmate who looked enough like him to be his twin.


In a media age, Mr. Hachmeister said, Goebbels has a relevance to modern times that Hitler lacks. With both, however, it is historical distance that has finally made them pop-cultural fodder.


"When people talk about propaganda," he said, "they always point to Goebbels. Of course, the German government we have today is the least conscious of propaganda of any government I could imagine."