Mad Magazine Fact-Checked by Snopes, Denounced by the New York Times, Censored by Amazon, Banned by Facebook, and Slammed by SJWs 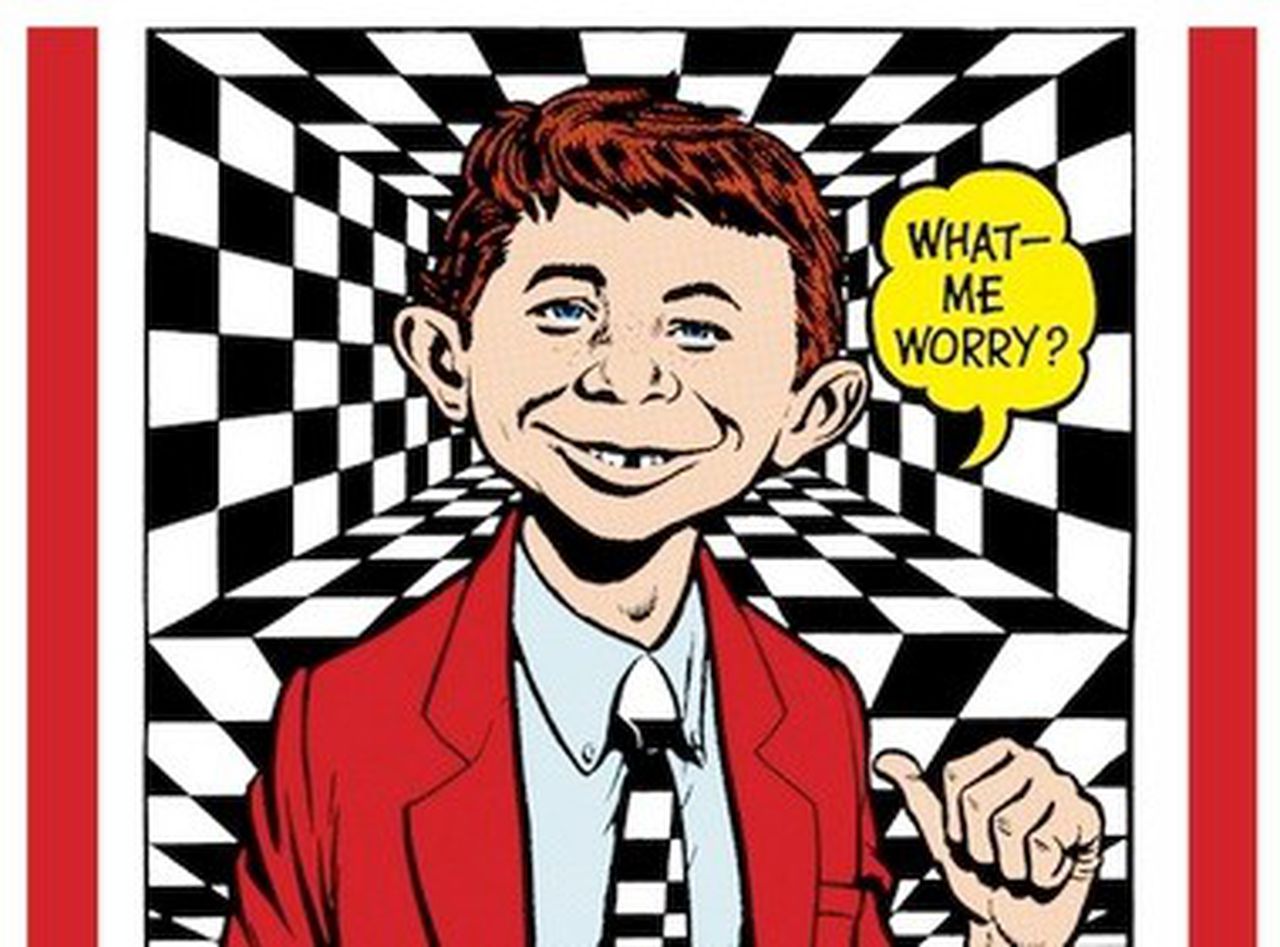 Mad Magazine was fact-checked by Snopes in the wake of a (rare) article making fun of Joe Biden, or his memory problems, coming to light on its website.

It was rated Mostly False by spokesperson Bobby Snopes Jr, who explained that "Every one in America cannot be expected to know that Mad Magazine is, or was, a satirical publication."

The issue was brought to the attention of mainstream media outlets like the New York Times and the Washington Post, who decided to let fact-checkers rummage through the history of the monthly.

This only worsened the scandal, as one of their number uncovered the publication of a series of problematic articles in the 1970s called "Snappy Answers to Stupid Questions."

Appalled by the negativity, the scorn, and the hatred displayed by one Al Jaffee, The Times decided to show the articles to a select group of college students at Columbia University.

The responses turned out to be almost universally negative, if not devastating: Mr. Jaffee makes us feel unsafe, said one female student who preferred to remain anonymous. It is judgmental, testified another who is majoring in gender studies, it is unsafe and triggering, said a third, while a fourth asked, "Where is the room for dialog? Don't you understand? This is precisely the reason why we need safe spaces."

Asked why anyone would write hurtful comedy like that, Mr. Jaffee, who turned 100 last March, said that that was a question that it was probably safer for him not to provide an answer to.

Threatening to limit the distribution of, and demonetize, the periodical founded by Bill Gaines and its website, an Amazon spokeswoman requested the censure of 290 articles or so while demanding "an apology from Mr. William Gaines, from his heirs, or from whoever is in charge of the website today."

One example given of a problematic story was a 1980s James Bond 007 spoof because "in today's #metoo environment, a number of people might be triggered by Mort Drucker's hot chicks or be offended by the title, 'For Your Thighs Only'."

One e-bay fact-checker who has been going back and looking through old Mad magazines for the past two months was asked if he at least enjoyed reading the compilations as well as the vintage issues.

"Honestly, it was more of a task — a noble one at that — so I haven't really had time to laugh, although I did chuckle a bit when I read spoofs of both Bushes, [Ronald] Reagan, and [Richard] Nixon…" (Like most humor outlets then as today, at least 70 to 80% of Mad's most acerbic comedy was directed at the right and at conservatives.)

At this point, Facebook joined the fray, saying it would deplatform Mad Magazine because the descriptive of the periodical's group of artists is, or was, "the usual gang of idiots", which is a synonym of "retards," which in turn is poking fun at cerebrally-challenged individuals, as seems to be the face of the periodical's tooth-missing mascot, Alfred E. Neuman.

Besides, added a Twitter spokesman, Norman Potrzebie, who brought up the subject of compassion, "doesn't this Alfred fellow turn out in reality to be an icky conservative spewing Republican propaganda?!"

When it was bemusedly pointed out that Alfred E. Neuman rarely says more than three rather uninspiring words, Mr. Potrzebie exclaimed:

Precisely! What is that motto of his, 'What, me worry?' That is it! A talking point! A GOP talking point! If he had any brains, he would know that there are many many, many things to worry about if we want to save humanity and the planet: the coronavirus, sexism, homophobia, transgenderism, #metoo, the patriarchy, toxic masculinity, racism, systemic racism, the deplorables, global warmi — I mean, climate change — the possibility of a Republican in the White House, Pépé Le Pew, and, worst of all, the fact that in 1619, a solitary white male in a tiny Virginia hamlet 150 years prior to the foundation of the United States decided to buy 20 slaves who had been bound for Brazil.

What may be worse, actually, added Twitter's Mr. Potrzebie, is that "the very word [i.e., Mad] means insane but it also means Angry, and what kind of people get angry?"

The Haters, he snarled, answering his own question, also known as the heinous members of the Republican Party; the Haters! he reiterated as he grew visibly distraught over people he barely considered members of the human race, but monstrous beings with no brotherly love for their fellow humans. The HATERS! Mr. Potrzebie repeated once more, as his eyes started bulging and his mouth began frothing.

The whole issue turned somewhat moot when it appeared that the magazine was no longer published
and that Bill Gaines had been dead for close to 30 years.

Was Mad Magazine's Publisher a Racist?

As we went to press, a group of Social Justice Warriors had jumped into the fray, convening a meeting on Madison Avenue, in which complaints were voiced that the "usual gang of REDACTED" at Mad Magazine (a prime example, they pointed out, being the aforementioned Mr. Jaffee) were all white artists, and that there was not a black face among them.

"Did Don Martin ever showcase an LGBTQ person?!" asked one of the participants, Fester Bestertester, pointedly. "In a respectful way, I mean."

The issue was dropped when it was discovered that two of the artists were of Latino heritage.

The issue was resurrected when it was pointed out that Antonio Prohías seems to have been a Cuban who left the tropical island as the valiant Fidel Castro and the mesmerizing Che Guevara were fundamentally transforming their nation and were gloriously bringing a bright new future to the Cuban people — so didn't that mean that the artist of Spy Vs. Spy (which in any case is far too violent) was some kind of icky (alt) right-winger from Little Havana?

The matter was dropped again when it emerged that the artist had been dead for over two decades.

The matter was resurrected once more when it was pointed out that Prohias had been replaced by a white artist.

The matter was dropped again when it turned out that, besides drawing Spy Vs. Spy, Peter Kuper is a valiant left-winger doubling as a rabid anti-Trumpist behind many Orange-Man Bad drawings for The New Yorker.

We will bring you updates to this article as they arise…

(And here it is! An update! Welcome, readers of Instapundit, Maggie's Farm, Uavcall, and Investment Watch!)

Another Update! Is the Mad Magazine Cancellation News Report True or Is It Satire?
Posted by Erik at 14:30

And you can quote me on that.

Is this serious? I legit can't tell.

I have some old National Lampoon items
PJ O'Rourke did a hilarious piece on races and nationalities.
The mob would hang a person today for it

God, I haven't heard of Don Martin in better than 60 years (loved his stuff).

And, if ever there was a generation that needed Mad Magazine, it's this one.

Good to hear from Fester Bestertester after all these years. I hadn't heard from him since that National Gorilla Suit Day celebration that ended so badly.

Much appreciated all this, and especially the news that Al Jaffee is still with us. We recently lost Frank Jacobs in the last two weeks and Mort Drucker not too long ago either.

Antonio Prohias wasn't the only Hispanic in the MAD stable. Angelo Torres did a lot of art work in TV and movie takeoffs as well.

Don Martin died in 2000. His work was magnificent, and to this day no one has had a better knack for sound effects.

MAD was always way ahead of its time on a number of issues. I recall (but can't seem to find) an article which prophesized our woke times: a ventriloquist routine with a dummy (am I still allowed to use that word?) asking un-PC questions and un-PC responses. The article shared the letters of complaint to the broadcaster airing the show, with the resulting episode re-broadcast without the offending dialogue--all of the dialogue.

That makes three Latinos at Mad:
Don't forget the king of the marginals, Sergio Aragonés
(It was a huge thrill for me to meet him at
Angoulême's comics festival 30 or 40 years ago…)

It seems 4chan has eaten all their lunches.

I don't get this. What it supposed to be funny? Or is it straight-up investigative reporting?

I suppose I ought to try to look up other headlines to see -- or assume that, because there are no links to Snopes, FascistBook Policy, etc, that this is satire -- but between laziness and an unwillingness to give those websites traffic, I'm not sure I'm willing to do that.

*Sigh*. Why do we have to live in a society where Poe's Law is in full force, and then some?

(Sung to the tune of HELLO, DOLLY!)
HELLO DELI,
This is Joe, Deli
Won't you please send up
A nice corned beef on rye.
A box of Ritz, Deli
And some Schlitz, Deli
And a sliver of my favorite
Homemade apple pie!
Turkey legs, Deli
Hard-boiled eggs, Deli
And tomatoes and
Potatoes you french fry, oh
Please don't be late, Deli
'Cause I just can't wait, Deli
Deli, without breakfast I will die!

Still remember the words after nearly 60 years. MAD was great.

In 1954, when I was 11, I read my first Mad and remembered sitting on my bed relaxed, all the anxiety left my body, thinking I’m not alone!

Sergio Aragones is still with us, too. But I guess being from Spain he does not count as Hispanic.

Update — Here are the answers:
Is the Mad Magazine Cancellation News Report Truth or Satire?
https://no-pasaran.blogspot.com/2021/04/is-mad-magazine-cancellation-news.html

The Left hate humor.
The worst thing you can do to a leftist is to laugh at them.