A Few Remarks to BluElephants, Republicans Who Are Urging People to Vote for the Democrat Party 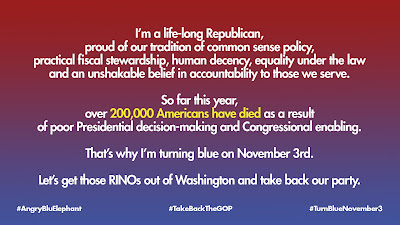 It seems that a couple of days from now, a number of Republicans are voting for the Democrat party out of disgust for the failings, real or alleged, of Donald J Trump.

Not only that, but the #AngryBluElephants, who want to #TakeBackTheGOP, are requesting that the rest of the population #TurnBlueNovember3, and in that spirit have been circulating memes like the one above, holding OrangeManBad responsible for the death toll caused by the Coronavirus.

To one Republican elected official's anger (who was a dorm mate of mine in college and who regrets the time of Ronald Reagan), my reaction on his wall has been as follows:

Thank God that (with the help of the mainstream media), people are managing to figure out who is to blame for the virus in America.

Just a couple of questions:

• Speaking of which: in compiling Trump's allegedly sorry record in fighting the Wuhan virus, how come no news outlet ever mentions that, like it or not, the very first steps taken against the virus were Trump's outright ban of flights from China? Steps widely ridiculed and demonized (as xenophobic and racist) by the media and in Europe, by the likes of Joe Biden, Nancy Pelosi (who promptly set up in a photo-op in San Francisco's Chinatown), and by such luminaries as the Italian politician who organized a "Hug a Chinese Tourist" movement.

• Do you remember the media's predictions in March, of two million deaths caused by Covid-19 in the U.S. before the end of the year? Would it be fair, some wag might say, to at least consider the viewpoint that the actual 220,000 toll means that Trump has… saved nearly 1,800,000 American lives?!

• And, more generally: a perennial with leftists is that (they love to repeat endlessly that) they are tolerant and considerate and (exceedingly) polite and, last but not least, and open to debate and discussion…

Why, then, is it that they like so much to shut conversation down?

This comment was not to the liking of the elected Republican official or to his wife (a charming woman, incidentally, whom he met at our college), who asked who I was to stand up for Donald Trump and why I did not believe Bill Gates when the Microsoft honcho denounced Trump's handling of the virus.

I’m not standing up for Donald Trump, nor for Joe Biden; I am not standing against either of them, either (or for or against Bill Gates, for that matter)

All I am saying is that for every criticism of the Republican, you can find a criticism of a Democrat; or of a foreigner

If Trump can be criticized for halting the plane flights (Bill Gates criticisms which I disagree with, but that’s not the point), shouldn’t at least some opprobrium be directed at, say, Nancy Pelosi for telling people to go visit Chinatown or at the Italian mayors whose response was it to institute (get this) a Hug-a-Chinese-tourist policy? (the appalling public service (sic) videos are on YouTube!)

You speak of the “well-documented” policies of Donald Trump…

Whatever the case with policy failings, general or detailed, real or alleged, the fact remains that Europeans didn’t react until weeks afterwards and few media outlets, American or European, seem to make much of that. Why isn’t that well-documented? And why does that not deserve any criticism?

It’s very strange that people living abroad are always allowed to think ill of the USA 🇺🇸 — antagonism which is supposed to reveal a deep dark truth about America — but when they are skeptical of the PC view and have something positive to say, they are told — by Americans and by their respective fellow countrymen alike — to mind their own business.

In that perspective, you seem to be forgetting that “the second-rate actor”, Ronald Reagan, was just as criticized and protested against in the 1980s as DT is now, by (outraged) Americans and foreigners alike, and for the same reasons…

People, American or foreign, are allowed to think that a Republican’s policy towards the Soviet Union (in the 1980s) or China 🇨🇳 (now) might be better than the PC fairy tale about how we can all live together if leaders only speak to each other, all the while ignoring how the same foreign leaders are really treating the West, stealthily, as well as their own people — i.e., shabbily is the softest word that comes to mind

If Foreigners (as well as Americans living abroad) have the right to criticize and protest the occupant of the White House, whoever is in the Oval Office, certainly they have the right to support same president as well, or to simply issue reservations…

In that perspective, it is telling that while protestors in America were burning the American flag, protestors in Hong Kong were waving the Stars and Stripes while singing the Star-Spangled Banner…

Does a protestor from Hong Kong, 🇭🇰 Xinjiang, or Tibet, i.e., not from the USA and living abroad — just like a person from the USSR or Eastern Europe in the 1980s — likewise have no right to praise Washington’s less conciliatory policy towards Beijing or Moscow — or, for that matter, any other of the president's policies (not excluding his vow that America will never be a socialist nation, leading the economic locomotive of the world to follow in the footsteps of, say, Venezuela, Russia, or… China)?

"Let's get rid of those RINOs" - good luck with that, because about 90% of the Republicans in Washington are RINOs and when the majority of your party are RINOs, well, that sort of means that the actual RINOs are those few who still adhere to the principle of a smaller, less powerful, less intrusive government. When Republicans are just Democrats in the slow lane, when they advocate for the same things the Democrats do, just not as much or not as fast, what use are they?

The perfect example of this is Obamacare - they campaigned for years on repealing Obamacare. But first they needed to regain control of the House. Then they needed the Senate. Then they needed the Presidency. And when they got all three? No Obamacare repeal. Now, of course, they can't repeal Obamacare until they come up with their own plan for nationalized healthcare with which to replace it. What difference does it make which party institutes nationalized healthcare when the end result is the same either way?

The US presidential race is between two magicians--Trump has the magical mana to make us all sick with covi-19; Biden is able to wave a wand and make 138,000 new Democratic votes appear out of thin air in Wisconsin. I guess Biden's is more democratic. sarc.

The European "innaleckchools" have never forgiven the USA for making it impossible for them to live and work under their idol Stalin. The ame goes for too many of their American apes. Had I the money, I'd start a foundation to help other Americans who've come to have a similar view arrange to have some uncles deceased 1943-45 dug up and brought home.