In Michael Moore's New Film, He Shows Cinema-Goers, American and Foreign, How Every Other Place in the World Is Far More Humane than the U.S. Is

Cara Buckley has a New York Times interview with Michael Moore, the point of whose “Where to Invade Next” is, basically, that everywhere in the world is a lot more humane than America is. Moore


travels to three continents to “steal” good ideas from foreign lands and bring them back to the United States, including France’s gourmet school lunches and Finland’s successful, and homework-free, public education system.

Moore spoke about the film’s origins, which began with a 1970s backpacking trip.

Q. Was the idea for this film cooking for a long time?

A. Since I was 19. Since I got a Youth Hostel card and Eurail Pass. Each country I went to with my backpack and my little tent, I’d keep saying,

“That’s such a good idea, how come we don’t do that?” Then I was hiking in Sweden and busted my foot and had to go to the emergency room and they fixed it. And I’m so nervous because my Blue Cross from the U.S. wasn’t going to cover me. I don’t have any money on me. “They go, ‘O.K., goodbye.” “What? That’s it? Don’t I owe you anything?” “‘No. It’s all free here.” “But I’m not a Swede.” “It doesn’t matter.” I couldn’t believe it. I was gobsmacked.

Well, maybe Moore would do well to consider the arguments in the following posts:
Color me skeptical when Moore explains the extent to which he has allegedly been the target of assassination attempts.


After my [2003] Oscar speech and I got booed off the stage, somebody at the [Transportation Security Administration] keyed the Oscar. I got home, I live in a rural

area in northern Michigan, some guys had a dump truck full of horse manure and built an almost four-foot wall across our driveway with the manure and then taped signs on all the trees along the road saying “Move to Cuba,” “Get the hell out of here,” just nutty stuff like that. Then I went through five years of a number of physical assaults on me, a couple of those were actually attempts to kill me, and then the attempt to blow up my house by this guy who had a fertilizer bomb, à la Oklahoma City.

Q. Do you avoid some topics that you would otherwise tackle were it not for the death threats?

A. No, no, no, no. Oh, no. “Bowling for Columbine” was a lot about how our fear is what motivates us to get these guns, and it puts us in a discombobulated state. … I can’t live in this constant state of fear that the hate machine that exists on talk radio and on Fox News whips up.

Reminder: Among No Pasarán's Michael Moore posts over a dozen years, we find the following:
• As the French Doctors Prepared Their Sharpened Instruments to Remove the Donor's Organs, Something… Twitched

• Masters of Deception: Noam Chomsky, Michael Moore, and the 9-11 Conspiracy Industry
• "Michael Moore could not withstand Michael Moore's scrutiny for more than 15 seconds"
• And last, but (certainly) not least:
the interview with the French newspaper in which the director of Sicko and Capitalism (A Love Story) admits in so many words — "Dude, I am on Marx's Tomb!" — to being nothing less than a Marxist 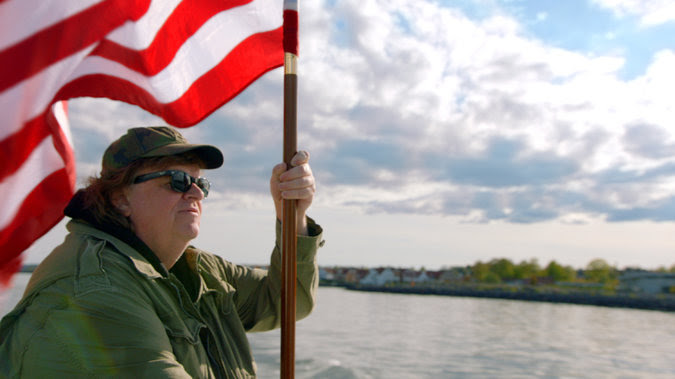